Daniel Shea
Foam proudly presents 43-35 10th Street an exhibition of the work of Daniel Shea (1985, US), who is selected by an international jury as the winner of the Foam Paul Huf Award 2018.

In conversation with Daniel Shea


Learn more about the artist's practice.

Daniel Shea was awarded the twelfth Foam Paul Huf Award for his work in which he presents a seductive and disconcerting world of concrete, steel and glass, which traverses the boundaries of fact and fiction. His cityscapes are poetic and timeless, yet they address the very real effects of capitalism on the urban landscape – and society at large. The title of his latest project 43-35 10th Street refers to his studio address in Long Island City: a residential neighbourhood in New York City that is rapidly gentrifying. However, Shea’s construction wastelands could have been (and in fact were) photographed anywhere in the world. Layering photographs from different times and places, the series transcends the local scale and addresses developments that affect cities globally. 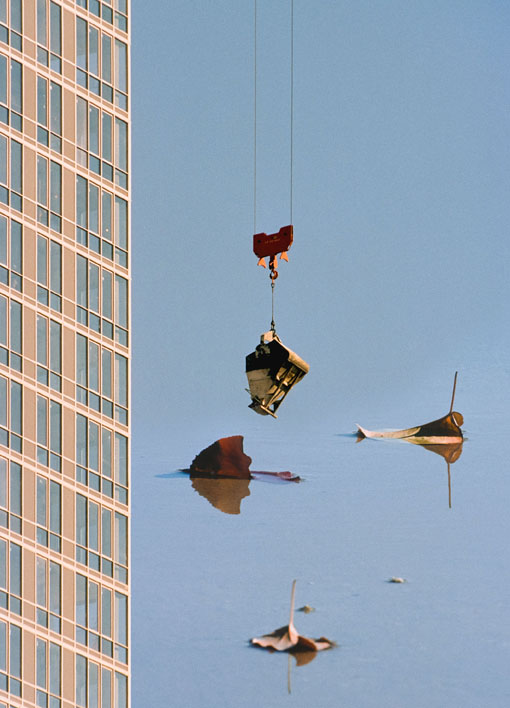 Shea’s belief that the built environment profoundly affects society, and vice versa, also informs his own practice. He often lets his compositions bleed onto their mount, or etches architectural blueprints into the glass of the frame. This deliberate use of materials gives his work an almost sculptural quality and emphasises the incongruity between an imagined utopia, and a sometimes dystopian reality.

Visit and revisit the work of Foam Paul Huf Award Winner Daniel Shea, other exhibitions and events as a Foam Member.

Daniel Shea is the winner of the 12th Foam Paul Huf Award, which is awarded annually by an international jury to talented photographers under the age of 35.

ABOUT DANIEL SHEA
Daniel Shea (b. 1985, USA) gained an MFA from the University of Illinois at Chicago after following a BFA at Maryland Institute College of Art, Baltimore, MD (2007). Approaching his subjects with intelligence, Daniel likes to immerse himself in their world, bringing out the specifics of a location and its humanity. Daniel is intrigued and energized by the density and chaos of the city. In his personal projects, he has addressed urbanization and industry, and particularly the effects of their decline on landscape and community. Shea lives and works in New York.

ABOUT THE FOAM PAUL HUF AWARD
The Foam Paul Huf Award, which is awarded annually to talented international photographers under the age of 35, includes a cash prize of €20,000 and an exhibition at Foam Photography Museum Amsterdam. The jury has chosen Daniel Shea as the winner out of 100 nominees from 25 countries. Previous winners include Taryn Simon (2007), Alex Prager (2012), Daniel Gordon (2014) and Romain Mader (2017).