For most people, drag (DRess As Girl) queens are an exotic phenomenon restricted to the worlds of spectacle, fantasy and entertainment.

Kings & Queens explores how drags challenge traditional gender definitions by showing that there is much more to life than simply being a man or a woman. But who are these drag queens? And who is the man behind the spectacular female display? Whose desire is satisfied with the transformation back and forth and what does one side get from the other?

The intimate portraits of fierce drag queens accompanied by their vulnerable male half bring the viewer closer to the drag queens’ identity beyond the exhibitionist extravaganza. Using photomontage, man and drag are seamlessly arranged in one image that reveals how the two personalities relate to each other. These portraits tell stories about gender, love, identity, sexual transcendence and even the nature of man him (or her) self.

Kings & Queens is a project by Léon Hendrickx in collaboration with performing drag artist Micha Schneijderberg (aka Snorella WC) and will be exhibited at Foam Café from 27 July until 6 August.

Also on view at Foam 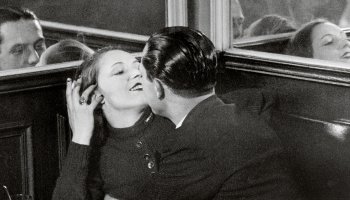