In the collaborative project No Joke, artists Roger Ballen  (b. 1950, US) and Asger Carlsen (b. 1973, DK), explore the more sinister sides of the human psyche. Together the duo produced 37 images, without ever working in the same studio at the same time: their creative exchange and co-creation has been a purely online affair. Their menacing work evokes a sense of anxiety and longing that is usually experienced only in dreams.

Asger Carlsen first suggested collaborating with Roger Ballen for an assignment by VICE in 2013. This evolved into a remarkable creative exchange that is conducted online only: the images with a white background originated in Carlsen’s studio in New York, while the images with a dark background originated in Johannesburg, where Ballen lives and works. The artists sent their work to each other and elaborated further on each other’s images. This resulted in the dark and mysterious book No Joke (Mörel Books, 2016): a collection of still lifes, crippled female figures, and fusions of their self-portraits.

No Joke at Foam is the first presentation in a museum of this work. The obscurely designed presentation shows framed images on dark-grey walls. The works are accompanied by bizarre sculptures and installations created by the two artists on-site, specifically for this exhibition. The sculptures form spatial renderings of their photographic images. 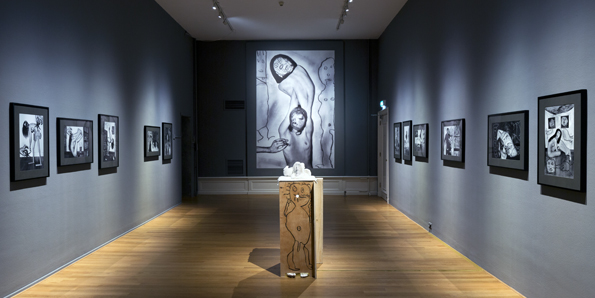 COLLABORATE! A YEAR OF VISUAL ENCOUNTERS
This exhibition is part of Collaborate!. To celebrate its 15th anniversary, Foam is organising a broad range of activities throughout 2017 united by the theme of collaboration, under the title Collaborate!.

ABOUT ROGER BALLEN
Roger Ballen (1950, US), award-winning photographer from Johannesburg, concentrates on fictitious narratives. Ballen’s work has featured in more than fifty exhibitions worldwide, including in the Victoria & Albert Museum in London, Centre Pompidou in Paris and the Museum of Modern Art in New York. His work was on show at Foam as part of the group exhibition PRUNE – Abstracting Reality in 2009. Latest publications include Asylum of the Birds (2015), The Theatre of Apparitions (2016) and the upcoming publication Ballenesque- Roger Ballen a Retrospective due for release in September 2017. Ballen has released numerous videos including I Fink U Freeky' with Die Antwoord in 2012. Roger Ballen is represented by Reflex Gallery, Amsterdam.

ABOUT ASGER CARLSEN
Asger Carlsen (1973, DK) is known for his distorted black and white photographs of the human body. He has exhibited worldwide includeing at V1 Gallery in Copenhagen; Marianne Boesky Gallery, New York; ParisPhoto, Paris; Dittrich & Schlechtriem, Berlin; MACRO, Rome; G/P gallery, Tokyo and Bruce Silverstein Gallery, New York. In 2016 his work from his series Hester was part of the exhibition Foam in Van Loon IV: Second Skin. His images have featured in international magazines such as HotShoe International, Frieze, Dazed & Confused and The New Yorker. Carlsen published two monographs: Hester (2012) and Wrong (2010). He lives and works in New York.