On Wednesday 6 June, Professor Carol Tulloch, artist Jan Hoek and Dr. Annette Schmidt will approach Keïta’s work from different angles: from the perspective of fashion, in the context of the history and culture of Mali, and through the eyes of an artist. 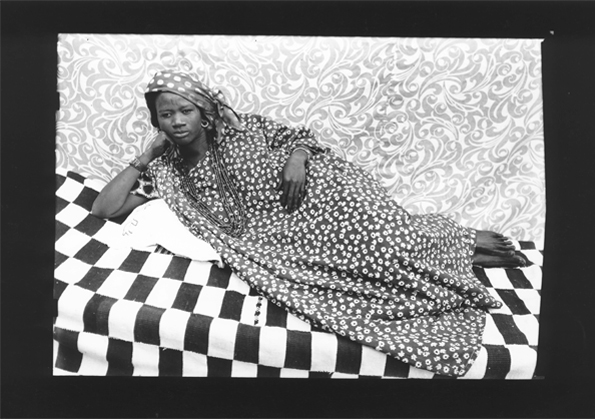 Fashion perspective: Professor Carol Tulloch
From the very start of his studio practice, Seydou Keïta offered his customers a wide array of props with which to have their portrait taken: from western dress items to accessories such as fake glasses, bow ties, watches, radios, telephones and vehicles. Many of his customers made playful use of these items to create modern and fashion-conscious portraits of themselves. Carol Tulloch is Professor of Dress, Diaspora and Transnationalism at the University of the Arts London who currently focuses on the presentation of self through the styled black body. This includes cross-cultural and transnational relations, cultural heritage, autobiography, personal archives and what she calls ‘style narratives’. Tulloch combines these approaches to consider how black people negotiate their sense of self within various cultural and social contexts, locally, nationally and internationally. From this perspective, she will shine a light on Seydou Keïta’s portraits.

Artist perspective: Jan Hoek
Keïta's portraits are completely detached from Western traditions and depict a contemporary image of Malian urban society in the 1950s and 1960s. In contrast to the many Western photographers who had previously portrayed Africans as part of a European ideal, Seydou Keïta's portraits are a collaboration between the portrayed and the photographer. When artist Jan Hoek published his book New Ways of Photographing The New Masai (Idea Books) in which he tried to create a visual counter-reply to the cliché image of the jumping Maasai, he received positive as well as negative feedback. Although he tried to disprove stereotyping, he still worked in a stereotypical historical tradition in which Westerners determine how African subjects such as the Maasai are represented. In his new book My Maasai (Art Paper Editions, 2017) Jan Hoek places that position in the hands of the Maasai people: his publication does not contain his photographs, but those of East African photographers and their own vision of the Maasai. Based on this learning process from his own artistic practice, Jan Hoek will reflect on the importance of Seydou Keïta's oeuvre.

Cultural-historical perspective: Dr. Annette Schmidt
The work of Seydou Keïta reflects a period of of transition for Bamako, from a cosmopolitan city in a French colony to the proud capital of an independent Mali. Dr. Annette Schmidt is curator of the Africa department in the Museum of Ethnology, the Tropenmuseum, the Africa Museum and the Wereldmuseum. She graduated on a regional archaeological research project in Mali, lived there for 7 years and continued her affinity with the country by leading various heritage projects in collaboration with the Malian Ministry of Culture. With her knowledge of the history and culture of Mali, she will explain the cultural meaning of various props in the photos of Seydou Keïta and tell us more about the time in which he worked.

ABOUT THE EXHIBITION
In the 1950s and 60s, a colourful collection of inhabitants of Bamako, capital of Mali, posed for Seydou Keïta. People visited Keïta’s studio to have their picture taken at their best.
> Read more

The exhibition Seydou Keïta - Bamako Portraits was developed in collaboration with the Contemporary African Art Collection (CAAC) – The Pigozzi Collection.