Hallucinating the Real
On Thursday 26 September, Foam invites you to an evening around the work of Dominic Hawgood. With a live performance by Tripping Jaguar.

ATTENTION
This event is sold out

ATTENTION: This event is sold out

In his solo exhibition Casting Out The Self, Hawgood combines the rituals of spiritual ceremonies with the instruments used for the construction of our digital reality. Employing the latest technologies in computer graphics to give shape to the hyperreal, Hawgood seeks to question our perception of reality.

With a background in both Cognitive Neuropsychology and Art Studies, Ph.D.-researcher Nim Goede will reflect on the viewing experience of Dominic Hawgood’s work, in between what one sees and what one thinks or expects to see. This short lecture will be followed by a Q&A between Dominic Hawgood and Foam curator Mirjam Kooiman about his artistic practice. The evening will be concluded with a performance by Trippin Jaguar. Where psychedelics informed Hawgood’s exhibition Casting Out The Self, Trippin Jaguar takes the same inspiration to create music. His performance will be an artistic response to Hawgood’s work. 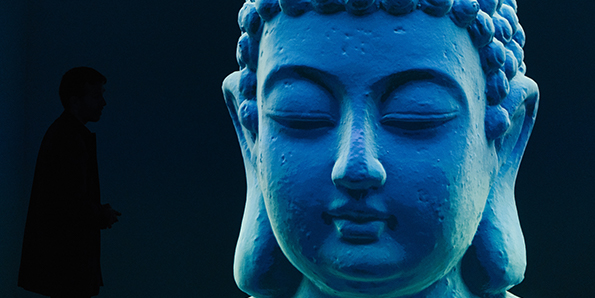 Opening Next Level: Dominic Hawgood - Casting Out the Self, 2019 © Almicheal Fraay (detail)

ABOUT NIM GOEDE
Nim Goede is a Ph.D. candidate at the University of Amsterdam and a core member of the Neurocultures & Neuroaesthetics research group at the Amsterdam School for Cultural Analysis. With a Research Master degree in both Cognitive Neuropsychology and Art Studies, he adopts a humanities perspective to reflect on neuroculture through the lens of the arts. He explores the ways in which particular artworks allow us to re(con)figure our neural self-image. In addition, he is a writer and editor for the contemporary art magazine Metropolis M and a lecturer at the Vrije Academie.

ABOUT TRIPPIN JAGUAR
Francesco Robustelli is a Dutch/Italian music producer, composer and sound designer. Under the alias Trippin Jaguar, Francesco explores the deeper side of electronica as well as breaking down cultural barriers in the electronic music scene by combining electronic music with influences from shamanic rituals and traditional psychedelic medicine. Trance, spirituality and the boundaries of the human experience play an important role in the work of Trippin Jaguar. In the approach of music as a way to transform consciousness, he combines traditional knowledge of sound healing with the newest technologies. He not only performs on stage but also works on immersive audio installations and transformative music projects.

ABOUT DOMINIC HAWGOOD
Dominic Hawgood’s work is based on photography, but he concentrates on site-specific installations. His work comprises both moving and stationary images, for which he increasingly uses digital media. Since graduating from London’s Royal College of Art in 2014, Hawgood has had solo exhibitions at TJ Boulting, London; Oonagh Young Gallery, Dublin; and the Digital Festival X British Science Festival in Brighton. In 2014 he won the British Journal of Photography International Award. In 2015 he was selected as Foam Talent and his project Under the Influence was included in the traveling Foam Talent exhibition. Dominic Hawgood lives and works in London.