Daniel Gordon
Foam welcomes the exhibition Shadows, Patterns, Pears by the American artist Daniel Gordon (b. 1980, Boston, USA). Gordon was chosen as the winner of the <a href="/talent/foam-paul-huf-award">Foam Paul Huf Award 2014</a>. This prize is organised by Foam and awarded annually to a promising international photographer under the age of 35.

The exhibition features a selection of colorful portraits and still lifes, created and photographed between 2010 and 2014.

The jury voted unanimously for Daniel Gordon whose work draws from the genres of still life and portraiture. The jury: "Coming from a generation that is comfortable using pictures from the internet, Gordon finds a unique way of reconstructing found imagery into 3-dimensional collages, which he then photographs. We are delighted to recognize this highly original and colorful work. He thoroughly deserves his place in the hall of fame of Foam Paul Huf Award winners".

Re-use is fundamental in the artistic process of Daniel Gordon. He finds the photographic images from the Internet, print these images, and assembles them into three-dimensional tableaus with scissors and glue. He photographs these arrangements with an 8x10-inch view camera. After the photograph is taken, the sculptures are dismantled and the different pieces (such as background patterns and body parts) are set aside for use in future works. 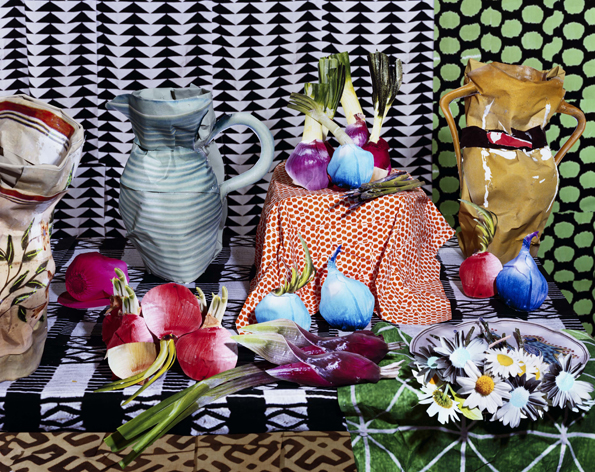 With this cut-and-paste technique, Gordon creates forms that expand upon the rich history of photography, collage and appropriation while also nodding to the tradition of the painted portrait and still life (such as Arcimboldo’s heads and Matisse’s still lifes).

The melding together of fragmented parts and diverse histories forms a dislocated reality, a contemporary portrait, where different perspectives, profiles and people merge into one, incongruous whole.

ABOUT DANIEL GORDON
Daniel Gordon (b. 1980 Boston, MA; raised in San Francisco, California, USA) earned a Bachelor of Arts from Bard College in 2004 and a Master of Fine Arts from the Yale School of Art in 2006. His group exhibitions include New Photography (2009) at the Museum of Modern Art in New York, and Greater New York (2010) at MoMA PS1. He published the books: Still Lifes, Portraits, and Parts (Mörel, 2013), Flowers and Shadows (Onestar Press, 2011) and Flying Pictures (powerhouse Books, 2009). Daniel Gordon is represented by Wallspace in New York City. He lives and works in Brooklyn, New York.

ABOUT THE PAUL HUF AWARD
The title of the award refers to Dutch photographer Paul Huf (1924-2002) who had a special connection with Foam. Huf was involved in the establishment of the museum in 2001 and he was known for his open and enthusiastic approach to new photography and upcoming talent – a clear parallel with Foam's mission statement.