Three installations revolve around the tactile aspects of photography, in which the outcome of the artwork is not determined by the camera, but by experiments with the material forms of the medium. Previously in his artistic practice Yokota would re-use images that he took years ago, but that keep re-appearing in different ways through various analogue and digital processes. In these new works it's not the image that keeps being reinvented, but the physical photo print and film. 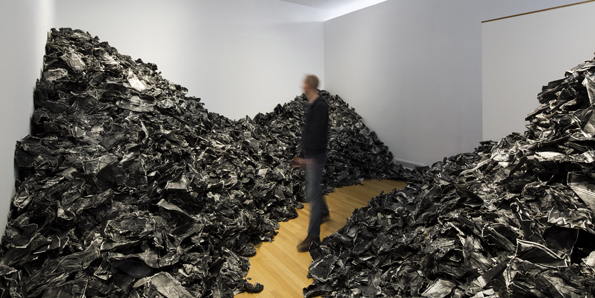 The artist is at the frontline of a new movement of Japanese experimental photographers. Yokota is working out of, and pushing forward, a Japanese photography tradition that harks back to the intuitive experimentation of the Provoke generation. In this exhibition, Yokota focuses on the aspect of volume and material of photography, pushing the medium and its perception forward into ever more original directions.

FOAM PAUL HUF AWARD
Daisuke Yokota was chosen as the winner of the tenth Foam Paul Huf Award in 2016. He was first featured in the Talent Issue of Foam Magazine in 2013 and works from his Site/Cloud series were the subject of a 2014 solo exhibition at Foam. Yokota lives and works in Japan, where he graduated from the Nippon Photography Institute in 2003. in 2015, Yokota won the Photo London John Kobal Residency Award. He is represented by G/P Gallery, Japan.

The exhibition of the Japanese photographer consists of room-filling installations that provide the viewer with new experiences of photography in each one of the three exhibition rooms. One of the installations entails an enlarged print of a film roll directly exposed without interference of the camera. This long trail is draped throughout the exhibition room and waxed on site. In another installation Yokota projects the outcome of darkroom experiments with unorthodox developing processes on the walls. A printer will slowly print these chemical distortions of the negative.

In his latest work Matter / Burn Out, Yokota sets fire to his own installation prints at an abandoned construction site in China. The resulting heaps of burnt material are documented by his camera and the images are recycled into a new autonomous artwork in the installation Matter / Vomit. The exhibition room filled with burnt matter reflects on the overflow of images we are confronted with on a daily basis and the growing indifference among recipients. Every day vast amounts of images are uploaded onto the Internet, but there are limitations to our ability to digest the incoming information. With this installation Yokota critically reflects on the limitations of our collective memory in today’s information society.

Yokota’s manipulations are philosophical musings on the medium of photography: “I guess it is common to think that the documented image is what is real in photography” the artist contemplates in an interview in 2014, “but by accentuating the materiality of the film, which by nature is more real than the documented image, the image actually becomes more abstract, and I'm interested in this reversed perspective”.