Artist talk: Robert Glas
On the occasion of the exhibition <a href="/museum/programme/robert-glas">Before the Law</a>, Foam organises a Q&amp;A with Dutch photographer Robert Glas on Saturday 9 September.

The artist and Foam curator Hinde Haest will discuss a number of his projects, which scrutinise legislative processes around immigration and personal identification. Glas' practice is an ongoing investigation into the technologies used by nation-states to monitor the movement of people across territories. This process results in short films, photographs and installations, a selection of which will be on display in Foam 3h, Foam’s project space for young talent. 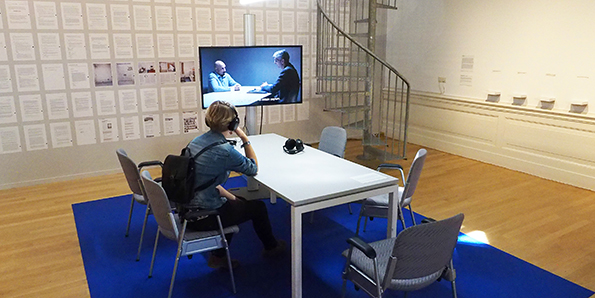 The artist goes to great lengths unpicking bureaucratic procedures, methods of identification and legislative inconsistencies. He worked with actors to unravel interviewing techniques used to 'motivate' asylum seekers to leave the Netherlands, and went through various lawsuits in order to make and publish images of detention centres for unregistered asylum seekers. These and other works are exhibited at Foam until 10 September.

There is a limited amount of spots available, so be sure to sign up in time.

The exhibition Before the Law was organised in partnership with NEU NOW, an initiative of ELIA – European League of Institutes of the Arts and co-funded by Creative Europe Programme of the European Union.

Robert Glas – Before the Law is made possible with support of the Gieskes-Strijbis Fund and the Van Bijlevelt Foundation and Kleurgamma.