Alongside a selection of images from the artist’s personal and commissioned work, Foam is also premiering two of Mitchell’s video works: Idyllic Space and Chasing Pink, Found Red. With these audiovisual installations, the artist explores a sense of play and childlike freedom for black youths.

Tyler Mitchell’s work visualises a black utopia. Making use of candy colour palettes and natural light, Mitchell captures young black people in gardens, parks or in front of idyllic studio backdrops where they appear as free, expressive, effortless, sensitive and proud. The utopia that Mitchell creates, makes one realise how highly it contrasts with the way reality is represented. He produces holistic imagery of individuals from his community and brings their humanity to the forefront.

In 2018, Mitchell wrote history with his photographs of Beyoncé gracing the cover of two different editions of American Vogue’s ‘September Issue’. Only 23 at the time, he became the first black photographer to make the cover in the 126-year existence of the prominent magazine. This along with many other accomplishments has made him one of the most closely watched up-and-coming talents in photography today. 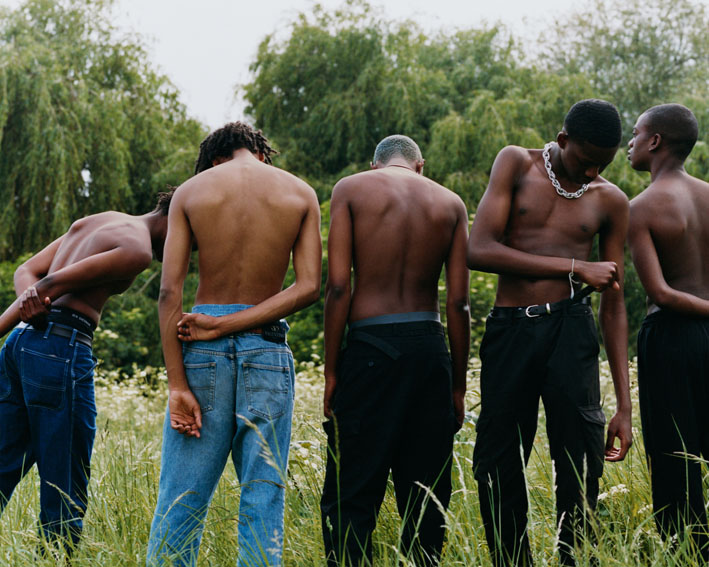 As a teenager, Mitchell spent a lot of time on Tumblr, a social media platform utilised by young photographers as a space to share their work. It’s a period of time which would become heavily influential on his vision, as Mitchell explained, “I would very often come across sensual, young, attractive white models running around being free and having so much fun – the kind of stuff Larry Clark and Ryan McGinley would make. I very seldom saw the same for black people in images – or at least in the photography I knew of then.”

Visit the works of Tyler Mitchell, other exhibitions and events as a Foam Member.

The video work Idyllic Space is supported by WeTransfer. In April, WeTransfer will be telling the story behind this unique installation on its content site WePresent through exclusive behind-the-scenes material from 'the making of' Idyllic Space.

The exhibition is made possible by Kleurgamma Fine-Art Photolab and AAP-lab.

ABOUT THE PREMIERING VIDEO WORKS
In Idyllic Space – one of two video works in the exhibition – young black people enjoy simple pleasures, such as eating ice cream, hanging around the pool and playing tag. Mitchell cites the 2014 killing of Tamir Rice – a 12-year-old boy who was shot by Cleveland police while playing outside with a toy pellet gun – as an urgent call-to-action, Mitchell’s video installation highlights the mindless activities many of us take for granted, to the point of being overlooked, as a bold visual reminder that these moments have historically been denied or discouraged among black people.

The video installation Chasing Pink, Found Red leaves little to nothing for speculation. A camera pans over a group of young black youths in a park on a warm summer day. However, the scene is punctuated by commentary crowdsourced by Mitchell from his followers on social media. In these sound bites, their voices express frustrations about their own experiences of racism and prejudice. The contrast of the commentary with the video’s optimistic imagery raises the notion that since an early age it is commonly built into a black youth’s psyche that they should be careful about being too off-guard in public for fear of persecution and even violence.

ABOUT TYLER MITCHELL
Tyler Mitchell is a photographer and filmmaker living and working in Brooklyn, NY. His career started at an early age: filming skate videos and documenting the music, fashion and youth culture in Atlanta. In 2017, he graduated from NYU Tisch School of the Arts with a B.F.A. in Film & Television. By this time, he had already published his first photobook El Paquete (2015), in which he captured the architecture and lively skateboard culture in Havana, Cuba. In his first years of college, he started making video clips for music acts and shot campaigns for Givenchy, American Eagle and Marc Jacobs, amongst others. In 2018, he made history when he photographed Beyoncé for the cover of the American Vogue’s September Issue. He has participated in various group exhibitions by Aperture Foundation, Red Hook Labs and Artsy. His work will also be shown in Foam Magazine #53: The Fashionable Issue, including an exclusive interview with the renowned curator and art critic Hans Ulrich Obrist (expected in April).