Foam presents a mixture of his photographs and videos, drawn from Infidel, Sleeping Soldiers, and Diary.

Infidel consists of large-scale images of the Korengal Valley in Afghanistan, taken to set the scene, as well as intimate portraits of the American troops stationed there. The photographs were taken over a period of one year in 2007-2008, during which Hetherington managed to get incredibly close to the soldiers.

"It’s all about the men. I didn’t want to pretend this was [...] about the war in Afghanistan. It was a conscious decision. [It] comments on the experience of the soldier. It’s brotherhood. The flow of pictures is to introduce you to the Korengal Valley first and then to see the men in an intimate way…To get to know them and how they lived. Then you see them in combat in the traditional combat style. Finally, you see them as young men, sleeping." 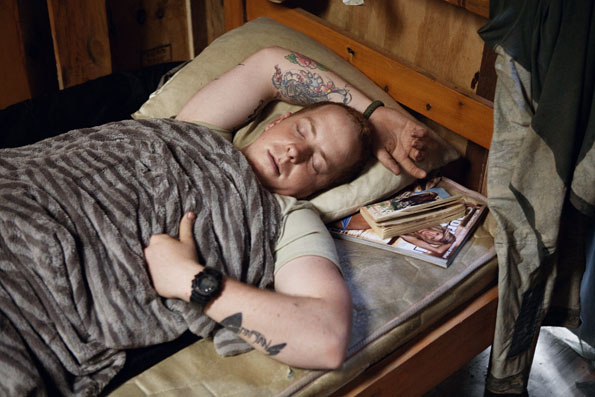 The exhibition has been produced in close cooperation with Yossi Milo Gallery in New York, and has been made possible with the support of the Sem Presser Fund.

ABOUT THE EXHIBITION
Alongside the prints of Infidel, Foam will show Hetherington’s film Sleeping Soldiers (2009). In this film we are confronted with intimate and tender portraits of soldiers asleep whilst stationed in a combat zone. It sheds light onto another and previously unseen part of modern warfare. The film drives home how incredibly vulnerable and young these soldiers are. It proves exactly how close the photographer managed to get to the soldiers of 173rd Airborne division.

The exhibition also explores Hetherington’s private thoughts and feelings about his work in Diary, a short film that collages original footage taken by Hetherington throughout his career. The photographer described Diary, which he directed in 2010, as "a highly personal and experimental film that expresses the subjective experience of my work, and was made as an attempt to locate myself after ten years of reporting. It's a kaleidoscope of images that link our western reality to the seemingly distant worlds we see in the media.”

ABOUT TOM HETHERINGTON
Born in 1970 in Liverpool, Tim Hetherington graduated from Oxford University and later studied at Cardiff University. Hetherington received numerous grants and awards including the 2007 World Press Photo of the Year. His images posthumously became part of the Magnum Photo Archive. His year in Afghanistan became the basis for the documentary Restrepo, which he co-directed with Sebastian Junger. The film was awarded the Grand Jury Prize at the 2010 Sundance Film Festival and was nominated for an Academy Award in 2011 for Best Documentary Feature.