Stephen Gill
Chronicler, visual poet, anthropologist, sociologist, alchemist and conceptual artist: Stephen Gill is a unique maker of images who is constantly putting the photographic medium to the test and is able to create a visual language where documentary photography, coincidence, experiment and interventions are closely linked.

Foam presents the first retrospective exhibition of English photographer Stephen Gill (Bristol, 1971). The Best Before End exhibition comprises a large number of series that Gill has made over the past fourteen years in and around the London Hackney district, as well as recent work shown for the first time.

The series in the exhibition all endeavour to reflect and respond to various aspects of life in this quickly changing district, which Gill has portrayed over the past years from the micro to macro level.

After devoting himself to documentary studies of Hackney’s urban landscape for years, Gill’s approach changed when he realised the limitations of this method of working. He has made various efforts to escape the technical restrictions of photography. The 2001 Hackney Wick series meant a new and liberating way of working. 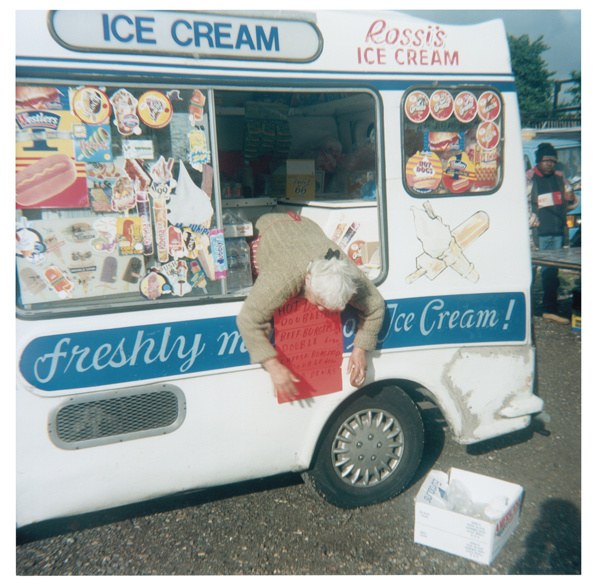 ABOUT THE EXHIBITION
The images in Hackney Wick were made with a plastic camera that Gill had bought at a jumble sale. Because of the plastic lens and lack of control over shutter speed and focus, Gill felt that these photos, with their blurriness and limited clarity, came much closer to capturing the essence of the place.

Gill took advantage of coincidence and employed manual interventions to help him to reveal what was most essential in his subjects. Among his working methods were burying photos (Buried), creating lavish collages with flowers and seeds (Hackney Flowers) and placing objects in the camera so that they left their traces on the film, causing confusion about the scale of the images (Talking to Ants).

Gill’s most recent series Best Before End was created with the aid of energy drinks which resulted in fantastical, abstract and vividly coloured works that through their intensity reflect contemporary, hectic urban life. First, he placed objects in the camera before taking the photographs, as he had done in the previous series. The negatives were later immersed in the energy drinks, which made the images shift their positions, disruptions to appear and softened the film emulsion. This made it possible to manipulate the emulsion – to stretch it, move it, tear it and to separate the various layers of the film, which were then reworked with a soft brush.

In addition to the photo series, each of which shows another of Gill’s subjects or concerns, the exhibition includes an overview of his publications. Gill is internationally esteemed as a significant maker of photo books, because of the special and tactile quality of the publications produced by Nobody, his own publishing house. Gill considers these publications to be the final stage of his photo series.