A sense of continual exploration of national identity typifies the body of work of Cypriot photographer Stelios Kallinikou (Limassol, 1985), who creates magical and beautiful images that are deeply rooted in the Cypriot landscape. The landscape, as a result of our collective action, becomes a vehicle for his thoughts on place, history, time and space –all fundamental issues related to human nature. 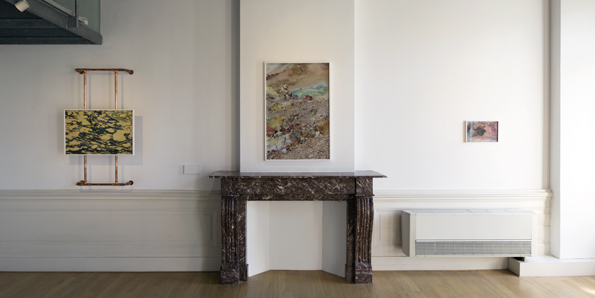 Kallinikou’s ongoing series Studies in Geology presents a group of photographs taken in an ancient mine hidden in the pine forests of Troodos Mountains, the largest mountain range in Cyprus. Based on archaeological excavations, mining activity in Cyprus can be dated back to the 3rd century BC. The presence of a large number of valuable minerals and useful, raw materials has made mining in the area attractive throughout the ages. This influenced the course of history and the interference of foreign powers on the island.

Kallinikou enters the crater of the mine and the resulting lake to observe the earth as an open body. He meticulously examines the ground and the surface of the lake for traces of human gesture as it has been inscribed throughout time. The result is a fascinating series at the edge of photography and painting in which Kallinikou is in constant dialogue with the act of seeing whilst considering new possibilities and limitations of the photographic medium.

Previously his work has been described as 'local poetry'. Kallinikou is not interested in narrating a linear story. His aim is to conjure a space that is beyond words. Simultaneously his appealing and technically skilled body of work circles around the politics of the landscape. By adopting the strategies of documentary photography via an introspective meditative pace, the world he constructs serves as a speculative scenario through which he can better envisage his relationship to territorial and ideological notions of the landscape such as birthplace, motherland and national identity.

This exhibition is made possible with support of the Gieskes-Strijbis Fund and the Van Bijlevelt Foundation.

ABOUT STELIOS KALLINIKOU
Stelios Kallinikou (b.1985, Limassol) studied History & Archaeology and Photography in Greece. His work has been presented in solo exhibitions and group shows at Encontros da Imagem in Braga, Portugal (2014); the Equilibrists, a project organised by the New Museum, New York and the DESTE Foundation, Athens, Greece(2016); Point Centre of Contemporary art in Nicosia,Cyprus(2017); APHF, Benaki Museum, Athens, Greece(2017); Nimac (Nicosia Municipal Arts Centre), Nicosia, Cyprus (2018). In 2015 he was nominated for Pla(t)form Winterthur fotomuseum and in 2016 he was nominated for the Prix Pictet award. Kallinikou will be a resident at the Künstlerhaus Bethanien, Berlin, Germany (2018-2019). He is the co-founder and director of Thkio Ppalies Artist-led Project Space, based in Nicosia, Cyprus.