In November 2016 and March 2017 Stefanie Moshammer visited the Haitian island Île-à-Vache. What looks like the Caribbean dream straight from a stock photograph, with waving palms and white beaches, is also a place of unfulfilled promises. Besides the beautiful surroundings of the deep blue ocean, bright green nature and colourful streets, cities and sea shores are also coloured by litter and waste, from plastic bottles and bags to polystyrene wrappings. In her series Tomorrow of Yesterday, Stefanie Moshammer researches notions of paradise, between Western ideals, yesterday’s promises, and the everyday lives of the people who live there. 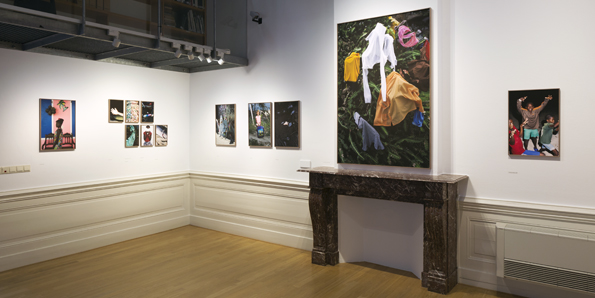 ABOUT STEFANIE MOSHAMMER
Stefanie Moshammer (b. 1988, AT) lives and works in Austria, where she received a BA in Graphic Design & Photography from the University of Art and Design. Her work - which has been exhibited in Austria, France, Portugal and Italy – has been published by the likes of Collector Daily, Purple Magazine, i-D, GUP Magazine and VICE. In 2015, Moshammer’s first photobook, Vegas and She, was published by Fotohof edition. In 2016 her work was also part of the Talent Issue of Foam Magazine and the internationally travelling exhibition Foam Talent.

The Foam 3h exhibitions are made possible with support of the Gieskes-Strijbis Fund and the Van Bijlevelt Foundation. The prints in the exhibition are produced by Kleurgamma.