Ron Galella
&ldquo;My idea of a good picture is one that&rsquo;s in focus and of a famous person doing something infamous. That&rsquo;s why my favorite photographer is Ron Galella&rdquo;. (Andy Warhol)

Ron Galella (1931, The Bronx, New York) attended the Art Center College of Design in Los Angeles and graduated in 1958 as photo journalist. In his spare time he started photographing stars attending premières. This became his true passion.

Galella typically doesn’t view his 'victim' through his lens; in order to really make contact, he looks right into the star’s eyes. He is also lightening fast, the essence of what he calls the ‘Art of Paparazzi’. By the time the stars have told him 'no', he can often do what they have asked – in the meantime, he’s already taken two photos. Galella’s method is seldom without humour. Following a confrontation with Marlon Brando he bought a helmet with the words ‘Paparazzi Ron’. 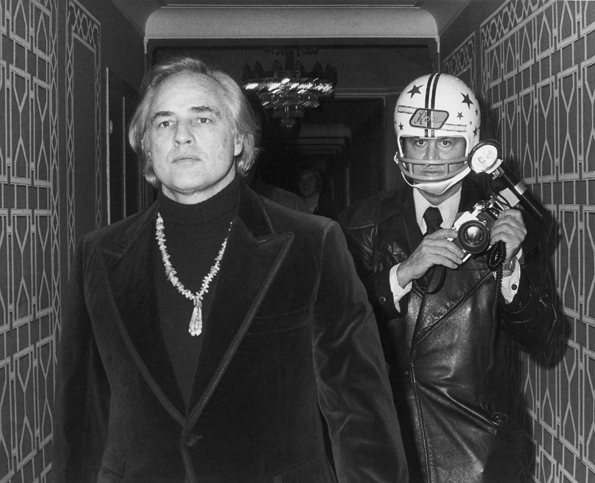 Although Galella did not invent the term paparazzi, he is the personification of the word. He redefined the relationship between celebrity and photographer. Jackie Onassis, his favourite subject, clearly dreaded the cheeky photographer; but other stars were glad to see him or were resigned to his presence. They realised that Ron Galella was a crucial link in the stars’ popularity, satisfying the general public’s voyeurism and stimulating magazine sales.