Robert Glas
In collaboration with <a href="http://www.neunow.eu/" target="_blank" rel="noopener">NEU NOW</a>, Foam presents the work of visual artist Robert Glas (NL, 1986) in the exhibition Before the Law.

His projects scrutinise legislative processes around immigration and personal identification. His practice is an ongoing investigation into the technologies used by nation-states to monitor the movement of people across territories. This process results in short films, photographs and installations, a selection of which will be on display in Foam 3h, Foam’s project space for young talent.

ABOUT THE SERIES
Glas goes to great lengths unpicking bureaucratic procedures, methods of identification and legislative inconsistencies. He went through various lawsuits in order to make and publish the images for his series Voor Vrij Nederland (2014-2016), which is exhibited at Foam. The photographs depict interiors of detention centers for undocumented immigrants in the Netherlands. It is hard to imagine these unremarkable spaces to be the cause of extensive legal strife concerning freedom of the press. The almost clinical depiction of the rooms stands in stark contrast with the political, social and emotional implications for the people that inhabit them.

Glas’ methods are conceptual and methodical. His projects are research-based and developed over longer periods of time. In How to Motivate Someone to Leave Voluntarily (2016) the artist explores the motivational interviewing techniques used by Dutch ‘departure supervisors’ to convince immigrants to give up their search for permanent residency and return to their home country. Through improvisation and with the help of an expert trainer from the field, the inner workings of this conversation technique were explored. 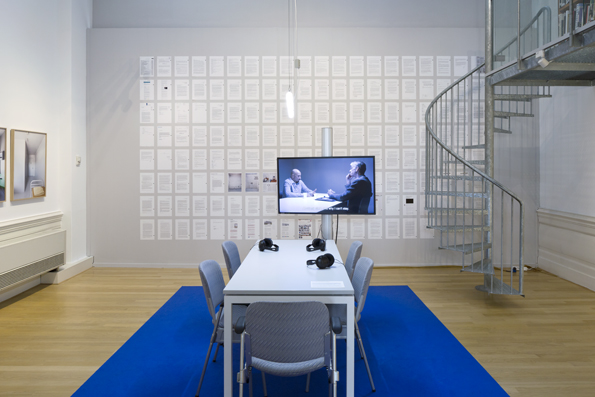 While his practice is mainly concerned with Dutch legislation, Glas’ work touches upon universal sentiments of belonging and social exclusion. The film Jurisdiction (2015) takes a more theoretical approach to the judiciary system in relation to displacement and migration. Abstracts from Franz Kafka’s seminal text Before the Law (1915) accompany x-ray images of refugees hiding in the back of vehicles. The work has gained particular urgency since the increased influx of refugees in Europe. The works in Before the Law beg questions: what constitutes the law, who does it serve, and who is excluded from it?

This exhibition was organised in partnership with NEU NOW, an initiative of ELIA – European League of Institutes of the Arts and co-funded by Creative Europe Programme of the European Union.

Robert Glas – Before the Law is made possible with support of the Gieskes-Strijbis Fund and the Van Bijlevelt Foundation and Kleurgamma.

ABOUT THE ARTIST
Robert Glas (The Netherlands, 1986) studied photography at the HKU University of the Arts Utrecht (BA) and AKV|St.Joost School of Fine Art and Design (MA). His work was exhibited at De Brakke Grond (Amsterdam), Kunsthal (Rotterdam), Gallery Joey Ramone (Rotterdam) and Van Abbemuseum (Eindhoven). In 2016 he received the Young Talent Grant from the Mondriaan Fund and was invited to join the Academy Honours Programme for Young Artists and Scientists by the KNAW Akademie van Kunsten and De Jonge Akademie. His work is included in the collection of the Van Abbemuseum. Glas lives and works in Rotterdam (NL).

ABOUT NEU NOW
NEU NOW is a transdisciplinary art festival devoted to presenting the work of exceptional emerging artists. NEU NOW annually selects the best of graduating artists across Europe and showcases a cross section of exciting developments on the contemporary art scene.