The footage shot with infrared film that was designed for camouflage detection results in vibrant, psychedelic magenta coloured sites of the jungle war zone. Besides the film installation, related photo works are presented.

Throughout 2012 and 2013, Richard Mosse and his collaborators Trevor Tweeten and Ben Frost travelled in eastern Democratic Republic of Congo, infiltrating armed rebel groups in a war zone plagued by frequent ambushes, massacres and systematic sexual violence.

The resulting installation, The Enclave, is the culmination of Mosse’s attempt to rethink war photography. It is a search for more adequate strategies to represent a forgotten African tragedy in which, according to the International Rescue Committee, at least 5.4 million people have died of war-related causes in eastern Congo since 1998.

The Enclave immerses the viewer in a challenging and sinister world, exploring aesthetics in a situation of profound human suffering. 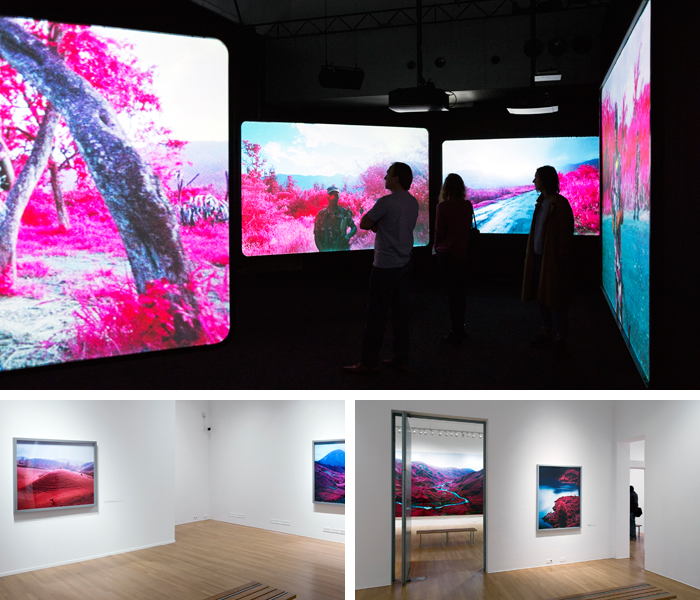 The Enclave is made ​​possible with the support of SNS REAAL Fonds, EIDOTECH, Stichting Democratie & Media.

ABOUT THE EXHIBITION
A long-standing power vacuum in eastern Congo has resulted in a horrifying cycle of violence, a Hobbesian ‘state of war’, so brutal and complex that it resists communication, and goes unseen in the global consciousness. Mosse brings a discontinued military surveillance film to this situation, representing an intangible conflict with a medium that registers an invisible spectrum of infrared light, and was originally designed for camouflage detection.

At the heart of the project, as Mosse states, is an attempt to bring “two counter-worlds into collision: art’s potential to represent narratives so painful that they exist beyond language, and photography’s capacity to document specific tragedies and communicate them to the world.”