Music and Photography; this might seem like an unlikely combination at first. However, still images can most certainly contain music or sound. During this special evening image and sound will alternate each other. A conversation with the artist will be followed by a sonic performance by composer Danny van de Lugt. 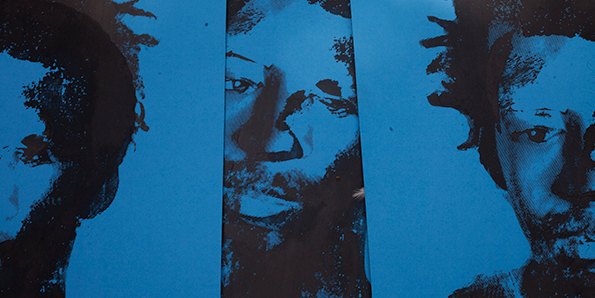 Untitled, from the series Fixing shadows; Julius and I, 2018 © Eric Gyamfi

Photographer Eric Gyamfi, born in Ghana, made the series Julius and I inspired by American minimal music composer, Julius Eastman. Gyamfi’s most recent work plays with the notions around experimental compositions, repetitiveness and the fact that Eastman’s compositions would contain theme’s from previous pieces. In a similar fashion Gyamfi produces a countless number of variations of two images, where climate, amongs other circumstances, influenced the final outcome of his images, or more precisely; cyanotypes. The images are combined with whatsapp-messages narrated by his friends and even strangers, who explain the images in very different ways.

Danny van de Lugt, also known as Rural Juror, translates in his compositions non-audible data into sound. In previous projects Van de Lugt translated pictures and spaces into soundscapes. Van de Lugt enabled this by using an algorithm, which he wrote himself. After the performance both artists will reflect and respond to their respective works and the audience can join the conversation.

Visit this event and other events as a Foam Member.

Read more about the exhibition Eric Gyamfi - Fixing Shadows, on view at Foam from 13 December 2019 until 11 March 2020 here.

Eric Gyamfi is the winner of the 13th Foam Paul Huf Award, which is awarded annually by an international jury to talented photographers under the age of 35.

The exhibition is made possible by Kleurgamma Fine-Art Photolab.

The Foam Paul Huf Award is made possible by the generous support from an anonymous partner.