Parks' café
On Friday 1 September the exhibition I Am You will be animated with performances celebrating Gordon Parks&rsquo; multifaceted persona.

Though he is best known for his documentary photography of humanitarian issues, Gordon Parks was also a celebrated filmmaker, composer and author. His creativity emerged in many disciplines and brought him in contact with some of the most prominent figures of his era. Parks' Café is an ode to this Renaissance Man and his enduring contribution to photography and beyond.

Under the guidance of RIGHTABOUTNOW INC, performers will infuse the exhibition galleries with poetry, movement, music and narration. Ritzah N. Statia, Nina Lawina, LOVESUPREME and Linar Ogenia are some of the artists featured in Parks’ Café. Tour guides will be sharing stories about Parks and funk, blues and jazzy sounds by Joya Mooi will set the mood at Foam. 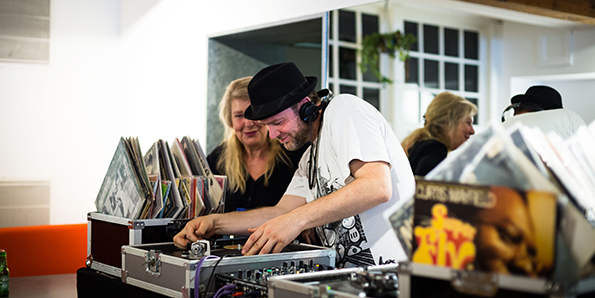 DJ Love Supreme at the opening of Gordon Parks - I Am You, 2017 © Daniel Lewensztain

ABOUT LINAR OGENIA
Performer and theater maker Linar Ogenia mixes intuitive and physical-style salsa with breakdance and martial arts. In 2007 he graduated from the Mime school of the Hogeschool voor de Kunsten Amsterdam and won the Hollandse Nieuwe Theatermakers prize with theatre group Orange Guinea Pigs.

ABOUT LOVESUPREME
LOVESUPREME started out as a hip-hop DJ known for his bold style and sets. Over the years he also brought funk, jazz, reggae and various African influences to his repertoire. As a music connoisseur, LOVESUPREME is also actively involved in theoretical and historical discussions of the genre.

The exhibition Gordon Parks - I Am You. Selected Works 1942-1978 is made possible with support from the American Embassy and the Democracy and Media Foundation. With special thanks to The Gordon Parks Foundation.