Outside/In: Stacii Samidin
On Thursday 27 July photographer Stacii Samidin will be at Foam for Outside/In, Foam's programme where guest speakers delve deeper into the stories behind exhibitions at Foam.

ATTENTION: this event is in Dutch

After an introduction to the exhibition Gordon Parks - I Am You, photographer Stacii Samidin will take you along to Park’s series Harlem Gang leader. One of Parks’ first series for Life Magazine was on the gang wars that were consuming Harlem in the late 1940s. As a major fan of Parks' work, Stacii will share his vision on this series and discuss parallels between Parks’ and his own work. Like Parks, he finds it important to show those groups in society that often remain underexposed; people who are disapproved by the majority of society. In both the Netherlands and the American continents, Samidin gained the trust of various gangs, or as Stacii prefers to call them; societies. After Samidin shared more about his own work, he and Foam curator Kim Knoppers will continue the talk about work and life of Gordon Parks.

ABOUT GORDON PARKS
American photographer Gordon Parks (1912-2006) used photography to expose the deep divisions in American society. Parks was an important champion of equal rights for African Americans and in his work addressed themes such as poverty, marginalisation and injustice. Aside from his iconic portraits of legends like Martin Luther King, he especially achieved fame through his photographic essays for the prestigious Life Magazine and films he directed, such as The Learning Tree and Shaft. 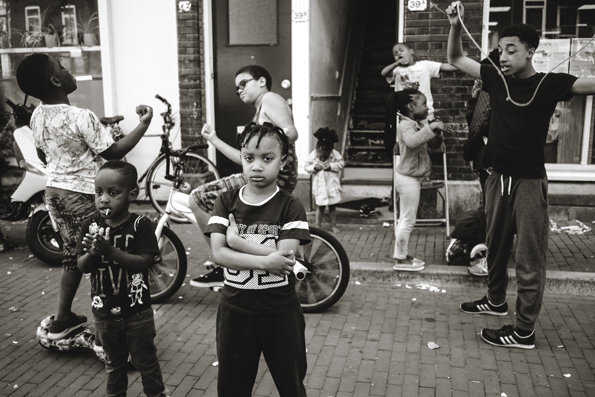 ABOUT STACII SAMIDIN
Stacii Samidin (1987, NL) is a photographer from Rotterdam. At the age of eightteen, he had his first encounter with photography as one of the subjects for a documentary photographer. This encounter evoked his interest in photography and eventually Samadin graduated from the Willem de Kooning Academy in 2014. In his work, Stacii focuses on group identities and portrays them with his analog camera to convey the sincerity and the raw edge of his subjects. Stacii’s work is featured in Vice Magazine, Dj Broadcast and the Hip Hop house in Rotterdam and his work has been exhibited various times. At the moment, his photo series Worldwide Societies is featured in the group exhibition BLUEPRINT: WHOSE URBAN APPROPRIATION IS THIS? In Tent Rotterdam.

The exhibition Gordon Parks -  I Am You. Selected Works 1942-1978 is made possible with support from the American Embassy and the Democracy and Media Foundation. With special thanks to The Gordon Parks Foundation.