Ola Lanko
Ola Lanko presents her project All year round, consisting of 365 photographic works of the same view of the IJ waterway in Amsterdam, offering a literal overview of a year.

In 3h, Foam's project space for young international talent, Ola Lanko presents All year round, a novel study and representation of the notion of time.

All year round consists of 365 photographic works of the same view of the IJ waterway in Amsterdam, offering a literal overview of a year. It acts as a visual archive of all the details and events recorded by the camera during that period of time.

From the window of Lanko’s apartment, her camera took 2,000 automated pictures of the IJ every day. These pictures were organised in chronological order, creating panoramic ribbons of the passage of time. The start and end of the day mark the frame of the image, producing what looks (from a distance) like strips of tone and colour that vary depending on the time of day with a total length of 21,9 km. Close up, however, the details of what has passed before the camera become apparent.

According to Lanko’s own findings, the only day with no commercial shipping on the water was Queen’s Day in 2013. She also discovered that there were 2.5 times more cloudy days than sunny and that it rained 1,610 times. She carefully studied the colours in the photographs as well. Each colour represents a certain weather condition, violet usually manifesting itself during the morning and bright yellow at the end of a sunny day.

The project is presented as a spatial installation, offering both the opportunity to experience time as momentum as well as a continuous and repetitive process where day, night, nature and changing weather conditions alternate organically. In the project, Lanko combines the mechanical logic of the camera with a romantic sense of impermanence. 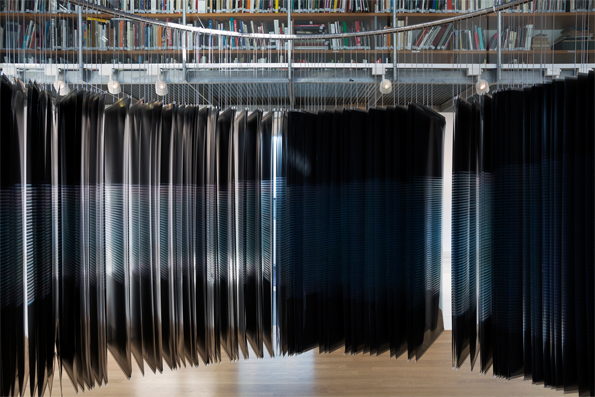 All the images were also saved in an online archive, where they are available for further viewing and study.

This exhibition was made possible with support from the Van Bijlevelt Foundation and the Gieskes-Strijbis Fund.

ABOUT OLA LANKO
Ola Lanko (b. 1985, Ukraine) studied sociology at the National University in Kiev and photography at the Royal Academy of Art in The Hague and the Rietveld Academy in Amsterdam, from which she graduated in 2012. Her graduation project was awarded the Steenbergen Stipend, an annual prize for photography graduates. She also won the ING New Talent Photography Award 2013.