Foam presents a short film by filmmaker Mali Arun (1987, France) in Foam 3h starting 3 July. In front of the camera a breathtaking landscape in black and white unfolds, teeming with lush vegetation and overwhelming waterfalls. Arun travelled to the seemingly untouched Krka nature reserve in Croatia. What she found there turned out to be far from paradise. The place is overrun by a never-ending stream of tourists who move in large numbers through the landscape, albeit uncomfortably.

Static, without tricks or elaborate artistic interventions, the camera simply registers the discomfort and the detachment with which modern man relates to his once natural habitat. We see tourists 'consume' the landscape en masse, as if it were an amusement park. As the film progresses, it takes on a steadily more oppressive undertone. The overwhelming natural beauty gradually turns into the setting for what increasingly resembles an apocalyptic doom scenario. 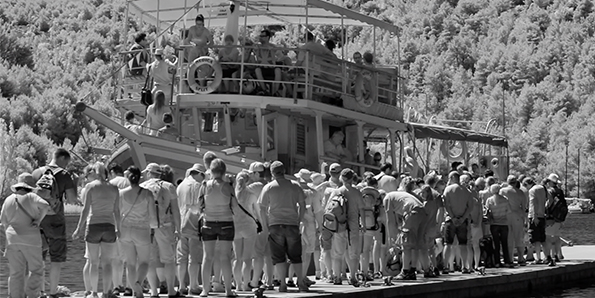 ABOUT MALI ARUN
The artistic practice of Mali Arun (1987, FR) mostly focuses on video work and photography plays a prominent role. Her work concentrates on how humans navigate the man-made landscape, particularly within and between borders. Arun studied at the École Nationale Supérieure des Arts Visuels in Brussels, at the Beaux-Arts in Paris and in Tianjin, China. She won the Grand Prix of the Salon de Montrouge in 2018, and her work has been exhibited in Palais de Tokyo, Phi Center in Montreal, CEAAC in Strasbourg and Art Geneva in Switzerland and her films have been screened at several film festivals. Arun lives and works in Strasbourg and Paris.

The exhibition was made possible by the Van Bijlevelt Foundation.