The body of work of Lorenzo Vitturi (1980, Italy) investigates urban changes beyond Western cities, processes of cultural mixing and their complexities, and the movement of people and goods in a globalised world.

Playing with the combination of reality and fiction, mixing photography, sculpture, painting and performance, he builds temporary sets in his studio, drawing from specific geographical environments. His projects focus on cities including Lagos, London and Venice and selected areas in Peru; on their colours and shapes and the communities that inhabit them. Vitturi uses selected materials in his sculptures and photographs to investigate the passage of time in a globalised world, capturing its mutations. 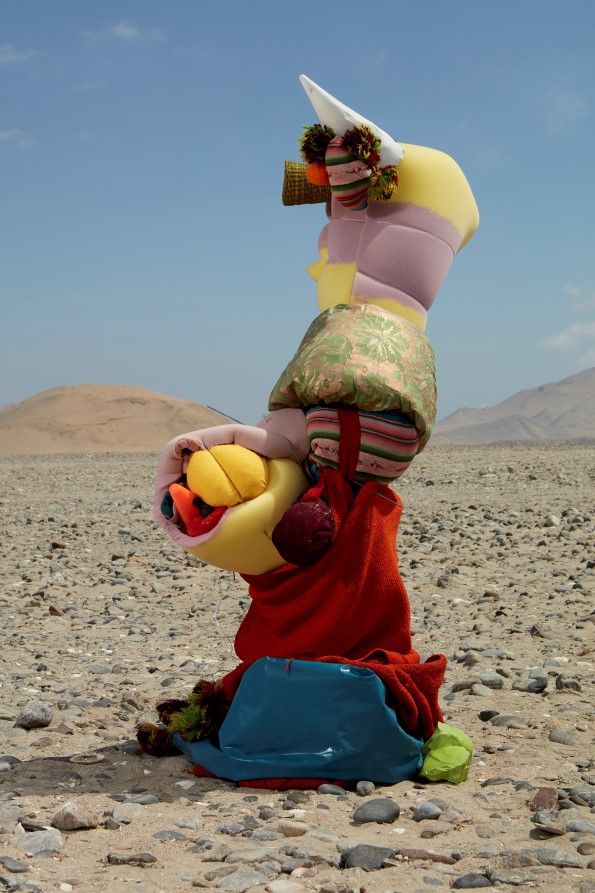 From the series Caminantes 2019 © Lorenzo Vitturi

The exhibition Materia Impura summarises ten years of research, combining Vitturi’s earlier projects Dalston Anatomy, Droste Effect, Debris and Other Problems and Money Must Be Made. It also presents the first output of Vitturi’s new work Caminantes (Spanish for walkers). This project draws inspiration from his family history and explores the encounters between and merging of different cultures. In the 1960s, his father, originally from Venice, crossed the Atlantic to open a Murano glass factory in Peru.

In Vitturi’s photographs, we see a cacophony of texture and colour. The camera documents the makeshift sculptures and interventions in the landscape, and as such, they endure. The landscape interventions mirror the impermanent nature of a rapidly changing globalised world in which cultures fuse. Meanwhile, their reintroduction in the exhibition space as photographic images and physical sculptures allows us to reflect on constant cycles of production, destruction, and recreation.

SMARTIFY AUDIO TOUR
Discover the stories behind some of the works presented in the first room of the exhibition Materia Impura via the Smartify app. Scan the tagged works to follow an audio tour by Lorenzo Vitturi in which he shares anecdotes from his journey to creating this latest series: Caminantes. The free Smartify app is available at the Apple App Store or Google Play Store.

The exhibition is made possible by the Gieskes-Strijbis Fonds.

ABOUT LORENZO VITTURI
Lorenzo Vitturi (1980, Venice) lives in London, UK. Vitturi’s first institutional solo show took place at Foam 3h in 2013.Solo exhibitions include Dalston Anatomy at The Photographers’ Gallery, London, at Contact Gallery, Toronto, and CNA, Luxembourg. Vitturi also participated to group exhibitions at MAXXI in Rome, at Centre Georges Pompidou in Paris, at Palazzo Reale in Milan, at La Triennale in Milan, at BOZAR in Brussels, at K11 Art Museum in Shanghai, at Barbican Centre and Somerset House in London. Publications include Dalston Anatomy (2013) and Money Must Be Made (2017). Vitturi won several awards including the Photography Grand Prix at the Hyeres International Festival in 2014. More recently he was chosen as one of the winners of the Grand Prix Images Vevey in Switzerland (2018).