Lieko Shiga
In her work, Lieko Shiga (1980) combines local myths with stories of ordinary people and their personal memories, feelings and experiences.

She creates fantastical and often dramatic images that make reference to the twilight area between dream and reality. Her often-dark work is deeply rooted in the Japanese folkloric tradition and the supernatural as a self-evident presence.

Shiga is part of a new generation of Japanese photographers. Her photos are characterised by a distinctive use of light and colour and a powerful visual language based on her own fantasy.

In her first meeting with a person or a place, or even before, Shiga visualises the definitive image she is going to create – as if she steps beyond herself and her body and finds herself in another existential state. The title of the series is based on this state of mind: ‘The body is simply a medium, I kept a canary inside my stomach.’ 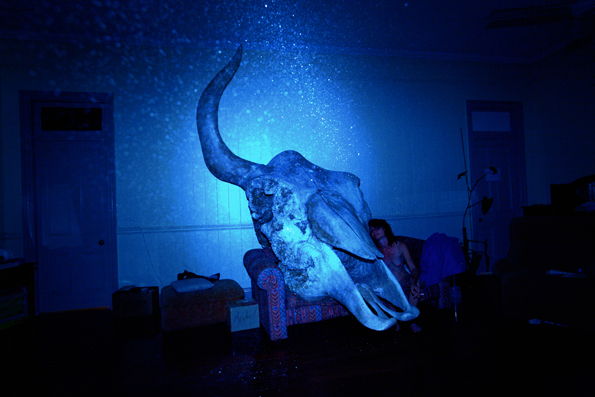 ABOUT THE EXHIBITION
Canary consists of 31 works in various formats. In addition to photos, a film will be shown with the same title, and the images accompanied by a stirring audio track (composed by Yuta Segawa). The works in the series were shot in Brisbane (Australia), Singapore and northern Japan. In order to establish contact with local people in these areas, Shiga formulated a list, and asked questions about specific places, personal experiences and anecdotes. Her contact with the people and the places they referred to served as the starting point for the series. Ultimately, however, the photos mainly reflect the fantasy world of the artist.

In most cases, the photos are deliberately staged, such as Wedding Veil, for which Shiga decorated a bare tree with thousands of paper blossoms or the surrealistic My Husband. For this intriguing image she created a huge animal skull, and posed alongside it. The series also contains several purely recorded images, such as Man Wearing Fur, for which she travelled to the mountains of northern Japan with a group of bear hunters.

ABOUT LIEKO SHIGA
Lieko Shiga was born in 1980 in the prefecture of Aichi. She presently lives and works in Sendai, Japan. In 2004 she graduated from the Chelsea University of Art and Design, London, earning a BA in Fine Arts and New Media. Canary won Lieko Shiga the ‘Infinity Award (Young Photographer)’ from the International Center of Photography, New York, in 2009. In 2007, her portfolio was published in Foam Magazine #12.