Lee Friedlander
The automobile has come to symbolise the American dream and the associated urge for freedom. That's why it's no surprise that cars play a central role in the series America by Car and The New Cars 1964 by renowned American photographer Lee Friedlander (1934, US).

America by Car documents Friedlander's countless wanderings around the United States over the past decade. He followed a trail laid down by numerous photographers, film makers and writers like Robert Frank, Stephen Shore and Jack Kerouac. Friedlander nevertheless succeeds in giving the theme of the American road trip his own very original twist, using the cars' windscreens and dashboards to frame the familiar American landscape, as well as exploiting the reflections found in their wing and rear view mirrors. This simple starting point results in complex and layered images that are typical for Friedlander’s visual language. 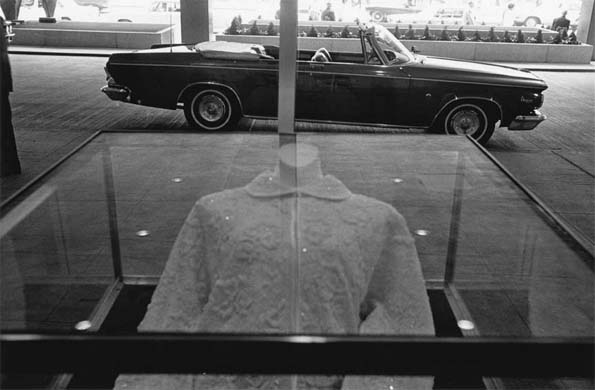 Friedlander has a sharp eye for ironic detail. He makes free use of text on billboards and symbols on store signs to add further meaning to his work. His images are so layered that new information continues to surface on every glance, making America by Car a unique evocation of contemporary America.

The New Cars 1964 is a much older series. Friedlander had been commissioned by Harper’s Bazaar to photograph all the new models of automobile introduced in 1964. Rather than placing them centrally and showing them to best advantage, Friedlander decided to set the cars in the most banal of locations, in front of a furniture store or in a scrap yard for instance. Exploiting reflections, available light and unusual perspectives, his cars are almost completely absorbed into the street scene. Although they were rejected at the time by the magazine’s editorial board on the grounds that the images were not attractive enough, the pictures were put away in a drawer and since forgotten. Friedlander however recently rediscovered this series. The New Cars 1964 has since become a special historical and social document and has in its own right become part of Friedlander’s impressive oeuvre.

The exhibition is organized in collaboration with Fraenkel Gallery, San Francisco and Timothy Taylor Gallery,
London.

This exhibition has been made possible by the generous support of the Embassy of the United States of America.

ABOUT LEE FRIEDLANDER
Lee Friedlander was born in the US in 1934. In a career extending across 5 decades Friedlander has maintained an obsessive focus on the portrayal of the American social landscape. His breakthrough in the eyes of the wider public came with the New Documents exhibition at the MoMA in 1967, where his work was presented alongside that of Diane Arbus and Garry Winogrand. Friedlander accumulated numerous awards during his career, including the MacArthur Foundation Award and three Guggenheim Fellowships. He also published more than twenty books. His work has been shown at many venues around the world, including the Whitney Museum of American Art and the MoMA in New York, San Francisco's SFMOMA, the MAMM in Moscow and the National Museum of Photography in Copenhagen.