Karl Blossfeldt (b. Germany, 1865) was self-taught and had kept up a keen interest in nature since boyhood. In the 1890s Blossfeldt began to systematically collect and photograph plants. This documentation was for artistic use rather than scientific. Blossfeldt employed photography to study so-called primal forms from nature.

Blossfeldt photographed flowers and plants with large cameras that he built himself. He preferred wild plants and weeds, since these showed nature’s primal forms far better than cultivated flowers and plants. He also documented flora at various stages of development.

Blossfeldt is considered among the artists of the New Objectivity movement. Why he was is evident in the fact that he cut away unnecessary twigs and leaves, before photographing his specimens close up against a neutral background. This enabled him to register their regular geometrical patterns. 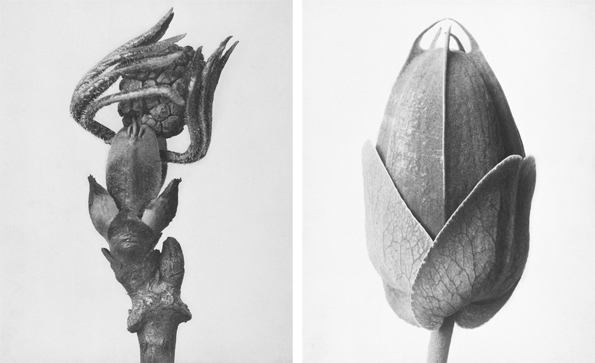 It was only later in life that Blossfeldt received recognition as a photographer. In 1926, Berlin’s Nierendorf Gallery hosted Blossfeldt’s first exhibition and published a volume entitled Urformen der Kunst in 1928. It was an international success and is considered a seminal work in the development of photography. A second book, Wundergarten der Natur, appeared in 1932. Blossfeldt was not to enjoy his success for long, he died that same year.

FOAM EDITIONS
Accompanying this exhibition, Foam Editions offers a unique selection of four modern prints from Blossfeldt’s original negatives in a limited edition of 150 for €250 per print. All are numbered and come with a certificate of authenticity from Die Photographische Sammlung/SK Stiftung Kultur in Cologne where Blossfeldt’s original negatives are kept. These prints are only available in the Netherlands from Foam Editions.

Thanks to the SK Stiftung Kultur and the Goethe Institute Amsterdam.