Joris Jansen
Joris Jansen describes and photographs pictures in microscopic detail: from the literal image in the photo, to the physical elements with which it is made.

In Kosmos, Jansen approaches an analogue photo from an encyclopaedic perspective. The result is a site-specific work for the Foam library on the third floor.

The exhibition revolves around a single old analogue photo. This picture does not actually appear in the presentation, rather Jansen uses word and image to analyze all the information conveyed by the photo. The result is on the one hand a kind of encyclopaedia of everything relating to the photo. On the other, the material of the photo itself is examined. Using microscopic images in which the chemistry and grain are magnified hundreds of times, Jansen presents an abstract world in which the structure and texture acquire an extraordinary appearance. 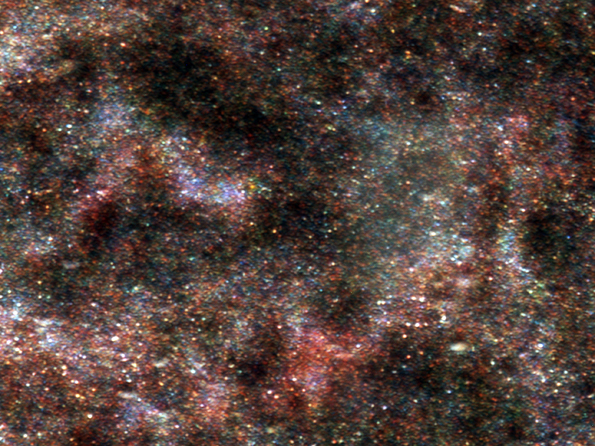 Kosmos was made possible with support from Van Bijlevelt Stichting and &Samhoud.

ABOUT THE EXHIBITION
This examination of the boundaries of photography and the uses of the medium is a recurring theme in Jansen’s work. In Flock, his final exam series, he explored the photo’s meaning and its material. Using clichéd photographic images – landscape, portrait and still life – Jansen presented three massive photos. These were constructed from hundreds of individual photos on the same theme, all found and collected on Internet. It is the viewer’s distance from the work that then determines how the picture is read. From close-by, the viewer reads only a combination of pixels, while the further back the viewer steps the clearer the picture becomes.

Another series, Pictures of Hue, comprises photos in which the pixels of the original photo are rearranged. Jansen made this new arrangement based on the place of the individual colours in the HSB colour chart. The resulting abstract forms produce entirely new images.

ABOUT JORIS JANSEN
Joris Jansen (b. 1980) graduated in 2009 at KABK in The Hague and won the Steenbergen Stipendium the same year. He has exhibited at Netherlands Photo Museum in 2009, CBK Rotterdam in 2009, CBK Den Bosch in 2010, Galerie van Kranendonk, The Hague in 2009, Ten Bosch Initiatief, Den Bosch in 2010, Ministry of Education, Culture and Science (OCW), The Hague, Kulter Amsterdam in 2009 and Pulchri The Hague in 2010.