JeanPaul Paula & Florian Joahn
In May and June of this year, JeanPaul Paula and Florian Joahn travelled to Brazil to experience the S&atilde;o Paulo LGBTQ Pride Parade 2018 and the Milkshake Festival, which originated in Amsterdam. (LGBTQ stands for &lsquo;lesbian, gay, bisexual, transgender, queer&rsquo;.)

Although the São Paulo Pride is the world’s biggest gay pride parade, a recent study showed that the number of LGBTQ deaths as a result of violence reached a peak in Brazil last year. At least 445 LGBTQ Brazilians were killed in 2017 as a result of homophobia, says the LGBTQ human rights movements Grupo Gay da Bahia.

Paula and Joahn met various people in São Paulo’s LGBTQ community, whom they styled and photographed on the roof of the apartment where they were staying, in the centre of the city. The resulting portraits show, above all, their strength and unique self-expression; according to JeanPaul Paula, they hardly needed any styling at all.

The portraits that the duo made in the setting of São Paulo have been combined with studio portraits of both leading LGBTQ performers like Richie Shazam Khan and Linn da Quebrada and inspiring people in their own environment. One portrait, of drag queen TAYCE wearing a fur coat and a flower garland, is an ode to Marsha P. Johnson (1945-1992, USA). She was an American LGBTQ rights activist, drag queen and transgender who was one of the founders of the first gay pride parades in 1970. 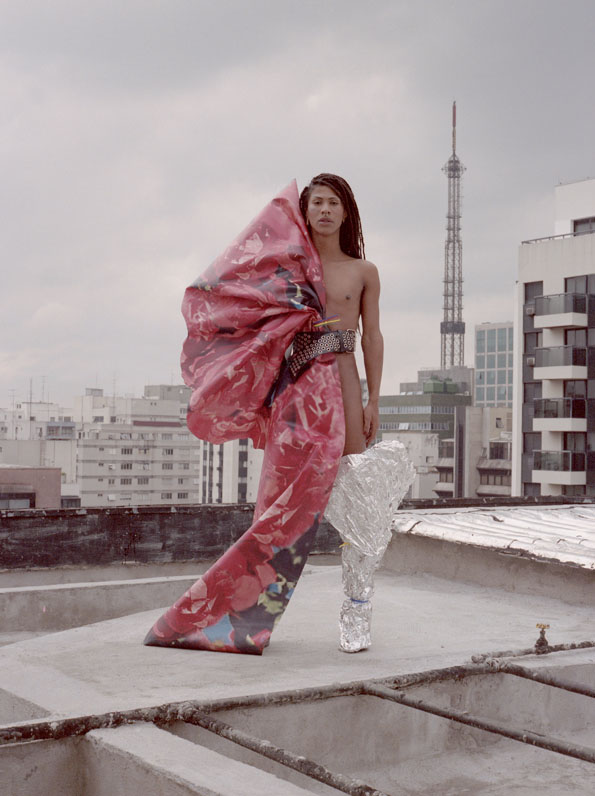 The title of the exhibition, Y'all Better Quiet Down, is a quote from Johnson’s fellow activist, drag queen and transgender Sylvia Rivera (1951-2002, USA), who was among the founders of the Gay Liberation Front and the Gay Activist Alliance. Together with Marsha P. Johnson, Sylvia Rivera founded the Street Transvestite Action Revolutionaries (STAR), a group that offered shelter and support to young homeless drag queens and transgenders. During the New York City's Christopher Street Liberation Day Rally in 1973, she told the audience “Y’all better quiet down!” when they booed her. During her subsequent speech, she spoke fiercely about the fact that she had fought for gay rights, but that now the most marginalised group, transgenders, were being abandoned by the gay community.

Through their work, JeanPaul Paula and Florian Joahn make it clear that the Pride is more than a merry parade – it is still a symbol of a worldwide struggle for equal rights for everyone, irrespective of gender, sexual preference, or gender and identity expression.

JeanPaul Paula (1986, Curaçao) and Florian Joahn (1990, Germany) regularly collaborate as a creative duo. In 2017, their joint project This. My Body. was part of the group exhibition Magical Mystery Tour in Kunstlinie Almere Flevoland (KAF).

This exhibition is made possible with support of Kleurgamma Fine-Art Photolab.

ABOUT JEANPAUL PAULA
JeanPaul Paula (b. 1986, Willemstad, Curaçao) grew up in the Netherlands and works as a stylist and creative director. After moving to Amsterdam in 2005, Paula had his first experiences in fashion as a stylist and model. In 2008 Paula became Fashion director for online and print publication Mykromag. In 2011 he became the fashion director for WAD Magazine in Paris, where he lived and worked for three years with a diverse group of people. He has done various projects, from commercial to editorial work and from film to music videos. He has worked with Jean-Baptist Mondino, FKA Twigs, Lacoste and Nike, amongst others.

ABOUT FLORIAN JOAHN
Florian Joahn (b. 1990, Karl-Mark-Stadt, DE) is a London based art director and photographer. He grew up in the last waves of socialist Germany. After living in Ghana during his late teens he came to Amsterdam to graduate at the Gerrit Rietveld Academie as an audio visual artist. His strong conceptual approach arrives from his love for simplicity and unity. His ambition to shed a new light on facets of photography and video drives him to create work that will provoke rather than entertain. Joahn’s modern approach did not stay unnoticed to his clients such as Nike, Converse, Carhartt, Rita Ora and Skepta.