For Foam, Versweyveld has selected work that is a major departure from conventional theatre photography. For the first time in his career, the spotlight will be on Versweyveld's unique double role as scenographer and chronicler of Toneelgroep Amsterdam.

In line with his views on scenographic transparency, he shows unguarded moments as only he can capture them: before and after a rehearsal, or from a viewpoint that the audience would never be able to see. In more than 40 never-before-shown images, the inbetweens exhibition unapologetically lays bare the unpredictability and the secrets of the theatre. 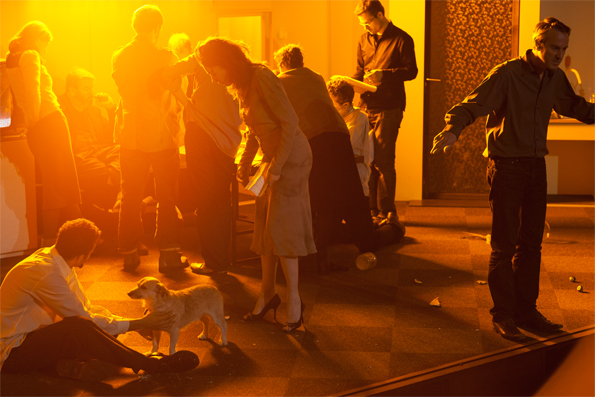 This exhibition is supported by the Prins Bernhard Cultuurfonds and the Van Meeuwen Kan Fonds.

ABOUT JAN VERSWEYVELD
Jan Versweyveld (1958) has been the in-house designer for Toneelgroep Amsterdam since 2001. He is head of scenography (works include Angels in America, Kruistochten, Het temmen van de Feeks, La voix humaine, Opening Night, Romeinse tragedies, de Russen!, Teorema and De Vrek) and is responsible for the graphic design. Since 2005, Versweyveld has also provided photographs for the productions. Jan Versweyveld has also worked as a guest lecturer at the Gerrit Rietveld Academie and co-founded the scenography studies programme in Antwerp. He has designed scenery and lighting for a variety of theatre productions.