Gordon Parks
The legendary American photographer Gordon Parks described his camera as his &ldquo;weapon of choice.&rdquo;

NOT YET A MEMBER?
Special promotion: become a Foam Fan or Foam Fan+ member now and get 50% off this year's membership fee.

The camera can be a powerful weapon against repression, racism, violence, and inequality. The American photographer Gordon Parks (1912-2006) used photography to expose the deep divisions in American society. Parks was an important champion of equal rights for African Americans and in his work addressed themes such as poverty, marginalisation and injustice. Aside from his iconic portraits of legends like Martin Luther King, he especially achieved fame through his photographic essays for the prestigious Life Magazine and films he directed, such as The Learning Tree and Shaft. 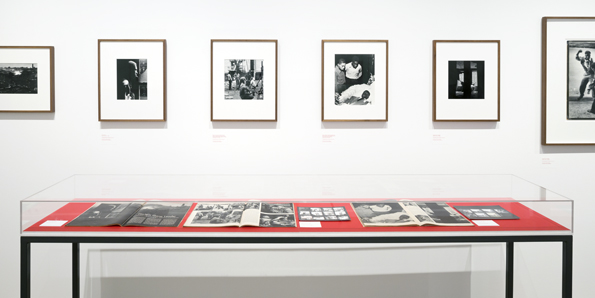 With the exhibition Gordon Parks -  I Am You. Selected Works 1942-1978, Foam presents 120 works from the collection of  The Gordon Parks Foundation, including vintage prints, contact sheets, magazines, and film excerpts.

Gordon Parks is best known for his black and white photographs, but he also produced a lot of work in colour. The exhibition includes many colour photographs as well as portraits, documentary photos and fashion photography. Excerpts from Parks’s films The Learning Tree and Shaft are also shown, which, in combination with the contact sheets and magazines containing his work, portray the social and political context in which he worked. It was a time in American history in which the African-American call for equality rocked the nation.

Gordon Parks -  I Am You. Selected Works 1942-1978 presents the work of a fabulous storyteller. Parks carved out a place for underexposed topics during a turbulent time in the United States. He stands out for his open attitude to the various groups making up a fiercely divided America. Through the striking narrative imagery of his photos and his films,  Parks managed to connect with a wide and diverse audience.

The exhibition was organised in collaboration with C/O Berlin.

This exhibition is made possible with support from the American Embassy and the Democracy and Media Foundation. With special thanks to The Gordon Parks Foundation.

The self-taught photographer Gordon Parks came from a family of fifteen children and grew up in poverty in the state of Kansas, USA. At the age of twenty-five, he bought his first camera in a thrift store and began taking on assignments in the fashion industry. Starting in 1942, he worked for the photography programme of the Farm Security Administration, a government programme aimed at combating poverty in the rural areas of the United States. In 1948, Parks gained fame with a photo report on a gang leader named ´Red´ in Harlem, New York. He was the first African American photographer to join the staff of the then most popular photographic journalism magazine in the world: Life Magazine. With his photographic essays, he depicted stories in which African Americans played a prominent role. As a result, a broad audience was introduced to such subjects as poverty, inequality and racial segregation.

Gordon Parks also photographed legendary boxer Muhammed Ali, as well as Martin Luther Ling, Jr. and Malcom X - leaders of the Civil Rights Movement. In addition to his iconic photographs and photographic essays, Parks is known for films he directed. In 1969 he made The Learning Tree, which was loosely based on his own experiences as a black teenager growing up in Kansas in the twenties. Shaft (1971) presented the very first black ‘superhero’. It was the start of the popular genre of Blaxploitation: films starring black actors and primarily aimed at a black audience.