For the exhibition Foam X Ruang Mes 56 two young artists, Yudha Kusuma Putera (Ngadirejo, 1987) and Andri William (Jakarta, 1986), who both studied photography at the Indonesian Art Institute (ISI) in Yogyakarta, were chosen to present their work. Both artists focus on collaboration and on engagement with others. 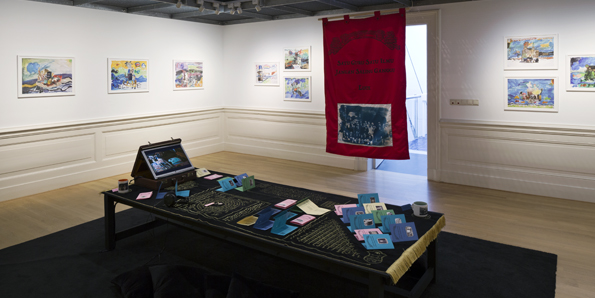 The starting point for the exhibition is the Indonesian tradition of gotong royong. In Indonesian society, the communal spirit is a quintessential aspect of culture. It can be understood on many different levels, including ways of working together, and ways of resolving matters collectively through reciprocal help, with the active participation of members of the community. The photography collective Ruang Mes 56 uses the practice of gotong royong to fulfil everyday needs, creating programmes to sustain the collective independently for more than fifteen years now.

ABOUT YUDHA KUSUMA PUTERA – KUMPULAN CERITA ANAK (COLLECTION OF CHILDREN’S STORIES)
Yudha Kusuma Putera believes that art cannot be detached from social life, as art exists in society, not as a segregated form. This approach opens up collaborative means of working which involve the participation of other people, while the aesthetic factor is still carefully considered. For the series Kumpulan Cerita Anak Putera combined watercolour-paintings from children with photographs of domestic objects found in or around their houses.

ABOUT ANDRI WILLIAM - SATU GURU SATU ILMU JANGAN SALING GANGGU (ONE TEACHER ONE SCIENCE DO NOT DISTURB ONE ANOTHER)
The series Satu Guru Satu Ilmu Jangan Saling Ganggu (2016) goes into local mysticism and the system of belief operating within it. Andri William asked a Shaman to apply his mystical energy to found photographs that he collected, which he then sold as talismans in an exhibition. William displays these talismans - consisting of the found photo and a text explaining the power of the item  - questioning the value system and meaning attributed to artworks both economically and culturally.

This exhibition is made possible with support from the Gieskes-Strijbis Fund, the Van Bijlevelt Foundation, Prins Claus Fund and Kleurgamma.