Foam X Hydra
Foam welcomes Hydra, a young photography platform based in Mexico City, for a collaborative presentation of young talent from Mexico at Foam 3h. 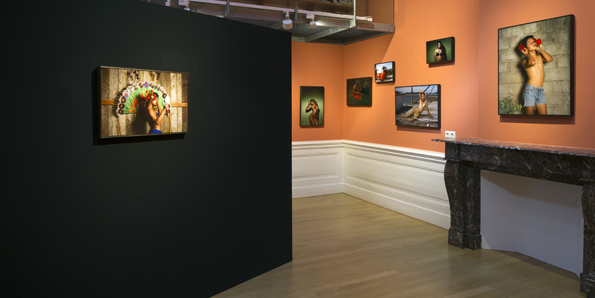 From workshops on bookmaking to curating exhibitions, Hydra organises a range of photography-related activities, establishing a vibrant network of contemporary photographers in the process. Foam and Hydra present the work of two young talents in Mexican photography: Nelson Morales (1982) and Diego Moreno (1992). Mexico’s complex history has created an equally complex society. Over time, it has absorbed various different cultures and traditions, combined strong Catholic values with beliefs from other religions, and mixed influences from foreign cultures with indigenous, pre-Hispanic customs. Through photography, both artists visualise and question notions of identity through personal and cultural explorations in their own local environment.

COLLABORATE! A YEAR OF VISUAL ENCOUNTERS
Foam X Hydra is the first of three collaborations taking place in 2017, involving photography platforms in Mexico City (Mexico), Lagos (Nigeria) and Yogyakarta (Indonesia) that each operate in a specific local art scene. The initiative offers Foam the opportunity to present young talent from different cultural contexts and to research new developments in local photography discourses worldwide.

This exhibition is made possible with support from the Gieskes-Strijbis Fund, the Van Bijlevelt Foundation and Kleurgamma.

DIEGO MORENO: GUARDIANS OF MEMORY
Every 22nd September, monstrous creatures in bulbous dresses descend upon the streets of Diego Moreno’s hometown, San Cristóbal de las Casas. These people, dressed as panzudos mercedarios, celebrate the Catholic feast of Our Lady of Mercy. The panzudos represent sin – the more sins the person has to expiate, the bigger and uglier their costume. Every year they remind Moreno of his late great aunt, Tía Cati, the black sheep of his family. Disfigured by a rare autoimmune condition and for a long time mistreated by her own sister, she was absent from family photo albums. After her death, Diego Moreno felt the need to rebuild her image. Over three years he staged scenes of panzudos in domestic spaces, portraying the home as a place plagued by ghosts to evoke the disturbing history of his family. Referencing the Mexican style of magical realism, Moreno fuses apocalyptic visions of the Catholic religion with pre-Hispanic traditions.

NELSON MORALES: MUXHES
In a corner of the Tehuantepec Isthmus in the south of Mexico, where Nelson Morales is from, live a people known as the Muxe – a Zapotec word intended to describe a third gender. Zapotec culture is derived from an indigenous pre-Columbian civilization in the Oaxaca region that accepted homosexuality. The Muxe are gay men who dress up as women, who are often attracted to heterosexual men and who adopt traditional female roles in family and society. Despite Mexico’s macho culture, the Muxe are considered a blessing to society, given their role as caretakers. Seduced and conflicted by the attraction that the Muxe inspired in him, Morales embarked on a long journey of self-discovery that has transformed his way of photographing. He slowly became part of his images, before accepting himself as a Muxe. His images are provocative, erotic and kitsch: he challenges us to question our notions of beauty, our politically correct ways of addressing sexuality as well as the stereotypical representation of femininity as embodied by the Muxe. Borrowing both the aesthetics of Zapotec culture and the contemporary imagery of Mexican movies and soap operas, Morales’ work addresses the cultural mixture of pre-Hispanic approaches to identity and sexuality that seem to take up new meanings in the globalizing society of Mexico.