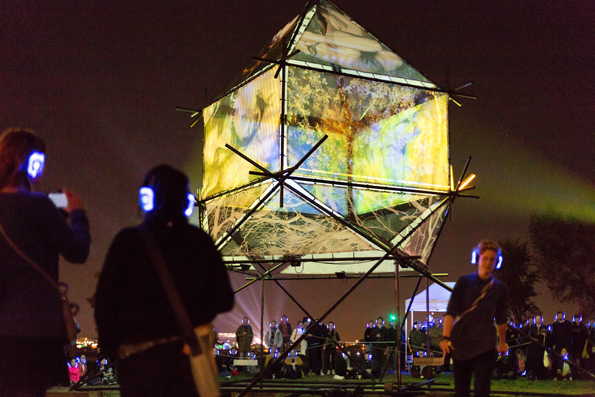 Both artists continuously question the definition of what truth is, through different dimensions. Simonet created a life-sized installation at Het Stenen Hoofd, and his psychedelic imagery is intensified by Trippin Jaguar’s spiritual sounds for a unique audio-visual performance.

Immerse yourself in moving sound and image during the opening of the installation with a live audio-visual performance on Thursday 19 October at 8pm. The installation is on display at Het Stenen Hoofd from 19 October until 12 November.

ABOUT JEAN-VINCENT SIMONET
Jean-Vincent Simonet (1991, France) graduated with high honours from ÉCAL in 2014 before starting his career of mixing editorial, fashion and experimental photography. His personal work was exhibited at Pla(t)form 2015 in Fotomuseum Winterthur and he also won a Swiss Design Award in Basel this year. Simonet was selected as a Foam Talent in 2015 and in the same year his exhibition Maldoror was presented at Foam 3h, Foam's project space for emerging talent. He lives and works in Paris.

ABOUT TRIPPIN JAGUAR
After being re-introduced rather serendipitously to hallucinogenic psilocybin mushrooms, Francesco Robustelli's alter ego Trippin Jaguar was born. Set on a course of spiritual growth and psychedelic and musical exploration, his music became the story of this journey. This brought him from Amsterdam to London, Tokyo and Berlin, and set his career on an entirely new path. Listen to Trippin Jaguar's tracks on Soundcloud.

COLLABORATE! A YEAR OF VISUAL ENCOUNTERS
To celebrate our 15th anniversary, Foam is organising a broad range of activities throughout 2017 united by the theme of collaboration, under the title Collaborate!. Foam X ADE Playground is part of this programme and goes beyond the limits of photography and fine arts, and help develop ties between different artistic disciplines, as well as venturing into scientific and technological fields.

The installation at Het Stenen Hoofd is made possible by City of Amsterdam, District West.