Foam 3h: Lorenzo Vitturi
An ode to the sensual pleasures of London&rsquo;s bustling Ridley Road Market. Lorenzo Vitturi: &ldquo;The market is a unique place where you can get to understand the people of Dalston in Hackney. Everyone together makes this place feel special&rdquo;.

Near this vibrant and kaleidoscopic market is the studio of Lorenzo Vitturi (1980, Venice Italy) located. The photographer spent time at the market taking pictures, making sculptures and creating collages with materials and objects he found amongst the debris of the marketplace.

Vitturi visited the market stalls and found parts of organic and inorganic matter, fabrics food, flesh, debris, and pigments. He rearranged their form, painted the parts and created colorful objects. Playing with the combination of illusion and reality, mixing together different mediums such as photography, sculpture, painting and collage he builds temporary sets. Vitturi uses all kinds of materials to investigate the effect of passing time capturing its transformation and decay.

The makeshift sculptures he creates mimic the organic and temporary nature of the market, and documenting this by photographing the objects is the way in which they endure before diminishing once more. In the photographs we see a cacophony of texture and color: Afro’s and braids, fruit, pork, fish and balloons, bright paint and tarps used for the stalls. Vitturi focuses on the abstract but universal language of shapes, colours and composition. 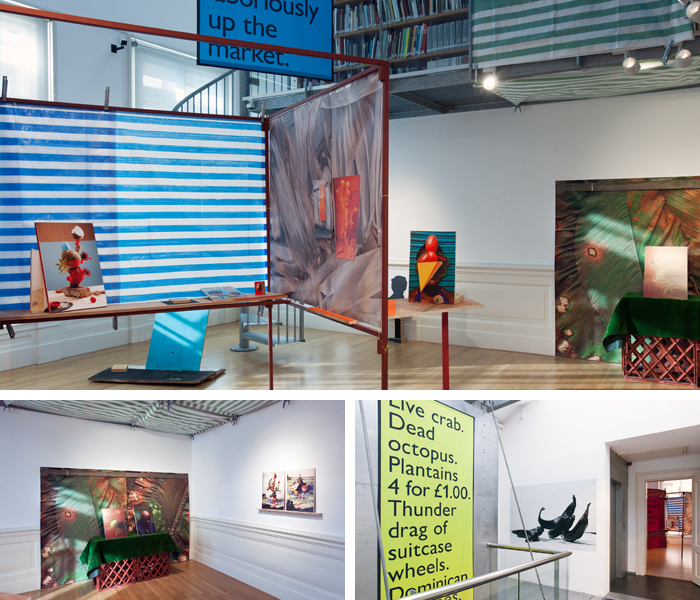 This exhibition was realized in close collaboration with curator Francesca Seravalle.

ABOUT LORENZO VITTURI
Lorenzo Vitturi is a photographer living and working between London, Milan and Venice. After graduating in photography and graphic design at IED in Rome he received a scholarship at the Benetton Communication Centre, Fabrica. He started out as a cinema set-painter in the movie industry in Rome and has brought this experience into his photographic projects, which revolve around site-specific installations using space, light and matter. Vitturi just published his book Dalston Anatomy (JibiJana & SPBH Editions, circulation of 700) that will prove to be a classic photobook soon.