Egon Van Herreweghe
In his exhibition Paintings and Sculpture, Egon Van Herreweghe (BE, 1985) shows an alternative approach to photography. Most important to the work in 3h: the symbiosis between body and skin, or between image and surface.

Van Herreweghe knows how hard it is for photography to adequately represent reality. Therefore, in his work, he attempts to focus on unraveling the creative process behind image-making.

The results of his studies are fleeting presentations and brief spatial interventions that cleverly show the status of the image and its genetic material. Over the past years, Egon Van Herreweghe has been collecting photos and clippings from newspapers, magazines and books. He studies these images by repeatedly subjecting them to different reproduction techniques, such as photocopying, scanning and printing.

For more than two months, the 3h space is home to Egon Van Herreweghe’s work: an installation, ‘paintings’ and a sculpture. 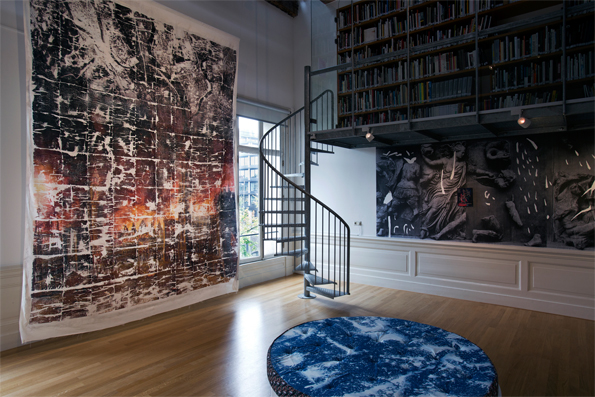 This exhibition was made possible with support from the Van Bijlevelt Foundation and the Gieskes-Strijbis Fund.

ABOUT THE EXHIBITION
The work that Egon Van Herreweghe produced for Paintings and Sculpture in Foam 3h has a direct link with the architecture of the room. A room that was originally furnished as a library, and which still comprises many classical elements, such as the panelling around the walls. Van Herreweghe uses this classical architectural detail both as a physical and a conceptual framework for an installation consisting of a reproduction of photos of the Telephos frieze in the Pergamon Museum in Berlin. In classical architecture, a frieze is often a continuing strip of narrative depictions of people and mythical figures. Van Herreweghe has printed a cheap black-and-white Xerox of the reproduction of the Telephos frieze and glued it to the wall. Large sections have been torn off, not so much in an attempt to recreate an urban atmosphere, but in response to alterations to the original frieze, of which only small parts have been found.

The idea of destruction and fragmentation is also visible in a large-scale ‘painting’; a composition of pictures printed onto fabric and then sewn together on a canvas. The immensely diverse nature of the pictures themselves, and of the eras they originate from make them clash. Once again, the combination of pictures is a response to alterations and the way that all images (paintings, photographic documents or commercial photos) try to convey meaning and information to diverse audiences using different strategies.

Van Herreweghe is also exhibiting a sculpture. A self-fabricated sofa, which takes its own logical place in the room as a useful object enabling visitors to observe the other work in the room, while serving as an object themselves. The sofa invites visitors to contemplate the nature of the exhibition room from a different perspective; to sit down and note that the patterned fabric of the sofa is no ordinary print: it is created from close-up photos of items of clothing. Confusion reigns; is this a pattern or is it a photo of an object? Moreover, it constitutes a paradoxical link between the fabric of the sofa and the clothes worn by the visitor, whereby illusion blends with reality.

ABOUT EGON VAN HERREWEGHE
Egon Van Herreweghe (1985) obtained a Master's degree in Visual Arts, specializing in Photography, at the Royal Academy of Fine Arts (KASK) in Gent in 2008. In 2008-2009, he took a one-year research Master's in Art & Design at the St Lucas University College of Art & Design in Antwerp. He is currently taking a post-graduate programme at the Higher Institute of Fine Arts (HISK) in Gent.