Dominic Hawgood
As part of the Next Level exhibition series, Foam presents the work of multi-disciplinary artist Dominic Hawgood (1980, UK).

In this exhibition, titled Casting Out the Self, Hawgood visualises the effect of the drug dimethyltryptamine (DMT), which he personally experienced as a transfer into the digital realm. His work creates a hallucinatory effect: photographs seem to move, flat surfaces reveal hidden depths, and the perception of space turns out to be an illusion. Hawgood researches and appropriates elements of computational photography into his work, leading into intriguing site-specific installations and sculptural elements that refer to both spiritual ceremonies and the digital rituals of computer graphics. Through lighting design, Hawgood creates a unique atmosphere that transforms the exhibition space into a twilight zone between physical and digital reality. Hawgood not only pushes the boundaries of the medium of photography but also expresses a highly innovative approach to exhibition design. 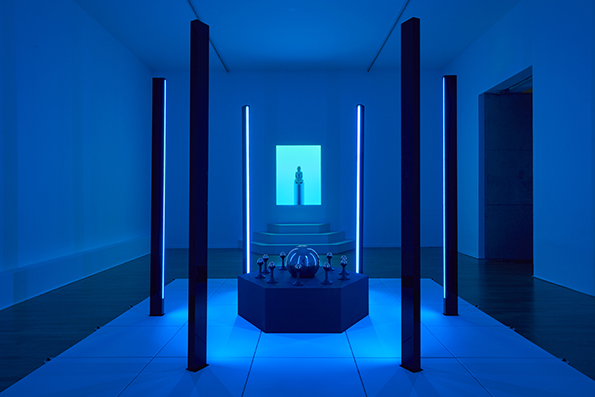 In the ceremonial atmosphere of the exhibition, spirituality is endowed with digital features so that digital reality also appears to be idolised. In this way, Hawgood accurately captures the ambivalence of the digital world we live in: the magic of infinite possibilities contrasts sharply with our brief attention span, information overload, persistent distraction, loneliness and seclusion.

NEXT LEVEL
Since 2015, Foam presents the exhibition series Next Level, with the support of Ammodo. The series is aimed at introducing the wider public to innovative art by relatively young artists who are making radically new use of the medium of photography. After the first series in which four Dutch artists were presented Dominic Hawgood is the first international artist in the follow-up series of Next Level.

ABOUT DOMINIC HAWGOOD
Dominic Hawgood’s work is based on photography, but he concentrates on site-specific installations. His work comprises both moving and stationary images, for which he increasingly uses digital media. Since graduating from London’s Royal College of Art in  2014, Hawgood has had solo exhibitions at TJ Boulting, London; Oonagh Young Gallery, Dublin; and the Digital Festival X British Science Festival in Brighton. In 2014 he won the British Journal of Photography International Award. In 2015 he was selected as Foam Talent and his project Under the Influence was included in the travelling Foam Talent exhibition. Dominic Hawgood lives and works in London.