For her multimedia installation In de Rarekiek, which was presented in Foam in 2012, Doina Kraal won the Foam 3h Award from Foam and the Gieskes-Strijbis Fund which allowed her to start her new project Touche-à-Tout.

Touche-à-Tout will be a similar but smaller installation, with which Doina will travel from Asia to Oceania, from North America to South America and from Africa back to Amsterdam. The presentation in Foam 3h kicks off this journey, which you can follow at www.touche-a-tout.nl. 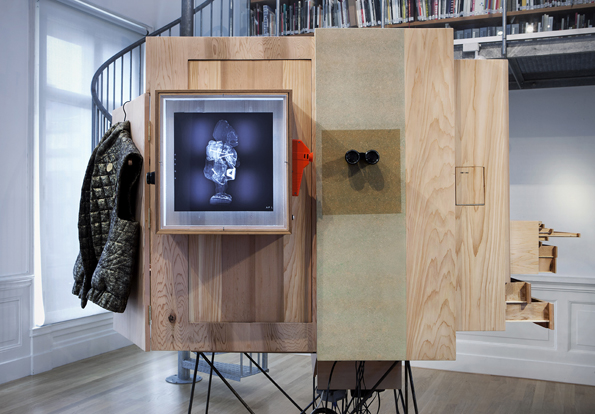 ABOUT DOINA KRAAL
Doina Kraal (1980) graduated from the Fine Art and New Media department of the Gerrit Rietveld Academie in Amsterdam in 2002. She then earned a Master in Fine Art at the Central Saint Martins College of Art in London. Her work has been shown in the Point Blank Gallery, Johannesburg, Times Square Gallery, New York, Museum Boijmans van Beuningen, Rotterdam, Soledad Senlle Gallery, Amsterdam and other locations in the Netherlands.

This project is made possible with financial support by The Gieskes-Strijbis Fund, the Van Bijlevelt Foundation, The Mondriaan Fund, The Amsterdam Fund for the Arts and sponsoring by forte_forte and Lejan.

ABOUT TOUCHE-A-TOUT
All the media that Kraal uses (rarekiek, slide, film and video, Internet) are representations of different forms of reality by means of which she keeps looking for the least static forms. In most cases photography is the starting point. During the exhibition, the work is revealed together with a performance by the artist herself to kickstart the exhibition.