Disfarmer
Between 1915 and 1959, American studio photographer Mike Disfarmer (1884-1959) made portraits of the residents of Heber Springs, a small town in rural Arkansas.

Only after his death did his work become known internationally and regarded as a typical example of classic American portrait photography. Foam is staging a major retrospective, with 182 vintage photographs, including a number of 8 x 10 inch prints that have never been exhibited before.

Disfarmer started life as Mike Meyer, one of seven children born to a family of German immigrants. In 1914 he and his mother arrived in Heber Springs. Along with George Penrose he ran a photographic studio for a while, called Penrose and Meyer. Their portraits were typified by the poses and props that were usual for photo studios of the time: arm in arm, or leaning on a small table placed on an oriental carpet against a background of romantically painted cloudscapes. This changed not long after Disfarmer set up his own studio in the main street of Heber Springs. The atmospheric settings were replaced by a black backdrop, or a white backdrop with a vertical black stripe. This gives his portraits a less nostalgic, more contemporary feel. 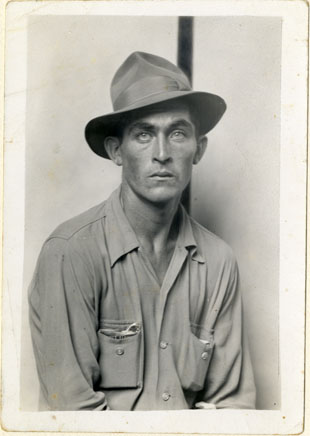 The exhibition Disfarmer – The Vintage Prints is part of a series of exhibitions about photo studios that Foam has presented in recent years, including Portraits from Isfahan, Fotogalatasaray and Miryam Sahinyan’s Photo Studio. This reflects a growing interest over the past twenty years in vernacular photography and in its value both as social history and as art.

ABOUT DISFARMER
Disfarmer’s clients were a cross-section of the population of Heber Springs: farmers in overalls and housewives dressed up for the occasion to soldiers in uniform, high-school football players and children in their Sunday best. He documented women whose husbands had been sent to the front in the First or Second World War, and he photographed the farming community during the Great Depression and in the more optimistic 1950s.

Disfarmer’s way of working was straightforward. He positioned his models directly in front of the camera, against a simple background, and had them look right into the lens. The effect is a focus on the individual without any distraction from the surroundings or props. At fifty cents for three, the photos ended up in postcard format in family albums and living rooms.

Not until 1977, eighteen years after Disfarmer’s death, did his work attract the attention of the world of photography and art. That year the ICP in New York organized an exhibition of enlargements made from the original glass negatives, which had been kept throughout the intervening period by the former mayor of Heber Springs. After an extensive project in Heber Springs, the vintage prints were brought together in early 2000 in the collection of Michael Mattis and Judith Hochberg, and at the Edwynn Houk Gallery. Since then the work has become part of the collections of the Arkansas Art Center, the Museum of Modern Art, the Metropolitan Museum of Art and the International Center of Photography in New York.

All prints are courtesy of the Edwynn Houk Gallery, New York, or the private collection of Michael Mattis and Judith Hochberg.