Diane Arbus
Diane Arbus has a gift for distorting the things we consider most familiar, and for uncovering the familiar within the exotic.

Diane Arbus (1923–1971) revolutionized the art she practiced. Her bold subject matter and photographic approach produced a body of work that is often shocking in its purity, in its steadfast celebration of things as they are.

Arbus found most of her subjects in New York City, a place that she explored as both a known geography and as a foreign land, photographing people she discovered during the 1950s and 1960s.

She was committed to photography as a medium that tangles with the facts. Her contemporary anthropology—portraits of couples, children, carnival performers, nudists, middle-class families, transvestites, zealots, eccentrics, and celebrities—stands as an allegory of the human experience.

Even the earliest examples of her work demonstrate Arbus’s distinctive sensibility through the expression on a face, someone’s  posture,  the  character  of  the  light,  and  the  personal  implications  of  objects  in  a  room  or  landscape.  These  elements, animated by the singular relationship between the photographer and her subject, conspire to implicate the viewer with the force of a personal encounter. 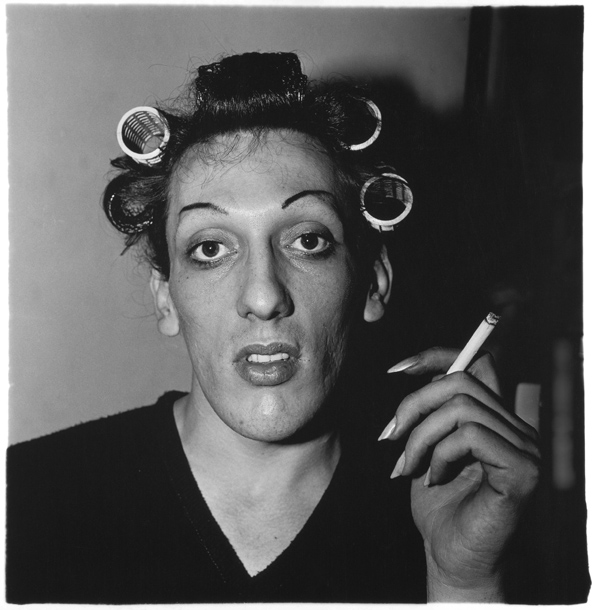 This exhibition has been organized by Jeu de Paume, Paris, in collaboration with the Estate of Diane Arbus LLC, New York and with the participation of Fotomuseum Winterthur and Martin-Gropius-Bau Berlin.

This exhibition is made possible by the generous support of the Turing Foundation.

ABOUT THE EXHIBITION
This exhibition of two hundred photographs affords an opportunity to explore the origins, scope, and aspirations of a wholly original force in photography. It includes all of the artist’s iconic photographs as well as many that have never before been exhibited in the Netherlands.

Much has been written and said about Diane Arbus’s work since her death in 1971—so much that it has sometimes made it difficult to see the work on its own terms. Foam is pleased to present a major retrospective of Arbus’ uniquely powerful photographs in the true eloquence of their silence.

The exhibition will enable each viewer to encounter the images much as the photographer encountered her subjects: directly, unencumbered by preconceptions.

Visitors  to  the  exhibition  seeking  knowledge  about  Arbus’s  life  and  working  methods are  able  to  explore  three  additional separate galleries containing biographical material, books, personal notebooks, correspondence and other writings in which the artist articulates the goals, obstacles, and strategies that went into making the pictures.