For Dutch artist Daniëlle van Ark (1974) photography is the most ephemeral of all media. With the development of steadily more advanced reproduction technologies, the expiration date of a photograph seems to diminish exponentially. Where the photograph was a unique and precious item in the nineteenth century, today everyone can record and reproduce memories at just a push of a button. But amidst the deluge of fleeting images produced and consumed every day, to what extent can something or someone still be truly immortalised? 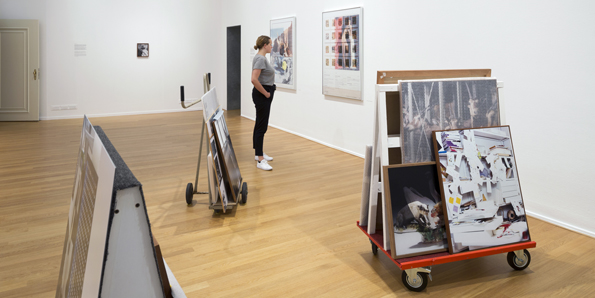 Van Ark is interested in the opaque systems of value creation in an era where everything seems to have become reproducible. Scouring flea markets and online auction sites, she acquired antiquated image archives that formed the starting point for new work. No image was sacred in the process, and the rear side, the printer’s proof and the negative were considered just as significant as the final reproduction. Her own archive was subjected to the same scrutiny: works she produced in the past were deconstructed and reused with the same unscrupulous rigour.

Artists’ Proof contains works from Van Ark’s most recent series. Common premise is the volatile meaning and value of the photograph as a reproducible art form. In addition to her most recent work, the exhibition presents an installation created specifically for Foam’s exhibition rooms. The installation consists of ‘old’ work, which is ‘stored’ on depot carts and shelves in the museum. Her installation is a playful protest against the power of the curator to position her work in the public eye – or to withhold it from view.

The exhibition opens on Thursday 19 April 2018, in the presence of the artist. You are welcome from 5.30 pm onwards.

Visit and revisit Daniëlle van Ark - Artist's Proof, other exhibitions and events as a Foam Member.

The exhibition is made possible by the Gieskes-Strijbis Fonds and Kleurgamma Fine-Art Photolab.

DANIËLLE VAN ARK
Daniëlle van Ark (Schiedam, 1974) studied at The Royal Academy of Art, The Hague and was a resident at the Rijksakademie van beeldendekunsten in Amsterdam. Her work has been displayed in numerous exhibitions in the Netherlands and abroad. In 2006 Foam exhibited her first solo exhibition, For Art’s Sake, in Foam 3h. Van Ark’s work is included in the collections of Foam, De Nederlandsche Bank, ABN AMRO, De Brauw Blackstone Westbroek, LUMC, Antoni van Leeuwenhoek, AMC, the Ministry of Foreign Affairs, Museum Voorlinden, and various private collections.