Changing Views Artist Talk
On the occasion of the exhibition Changing Views - 20 Years of Art Collection Deutsche B&ouml;rse, Foam presents an evening around the collection of one of the most important corporate photography collections in the world.

Anne-Marie Beckmann, director of the Deutsche Börse Photography Foundation, will introduce participants to the extensive collection, which she has curated from the very beginning. Beckmann will then go into conversation with three of the photographers presented in the collection: Dana Lixenberg, Julian Röder and Tobias Zielony. The talk will focus on the body of work of these artists and will touch on themes such as identity, subcultures, representation, and how these themes are being influenced by developments in the social media landscape. 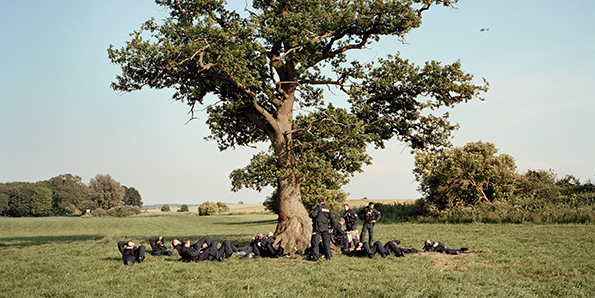 The Deutsche Börse started its renowned Art Collection in 1999. This year it celebrates its 20th Anniversary. The Collection is dedicated to the central themes of contemporary photography from the mid-20th century onward, with subjects ranging from landscapes and portraits to still lifes, interiors and street photography. Since 2015, the non-profit Deutsche Börse Photography Foundation has been responsible for the development, presentation and preservation of the Art Collection Deutsche Börse. The Foundation’s intended purpose is to develop and show the collection as well as to promote projects and institutions on the subject of photography. Most notably, it focuses on discovering and supporting new talent as well as on developing educational platforms and encouraging scientific dialogue.

ABOUT DANA LIXENBERG
Dana Lixenberg (1964, NL) studied photography at the London College of Printing and at the Gerrit Rietveld Academie in Amsterdam. The artist’s sensitivity for capturing the finest indications and details of human expression are striking in each of her portraits. The series Imperial Courts 1993–2015, her most extensive body of work to date, was awarded the Deutsche Börse Photography Foundation Prize in 2017.

ABOUT JULIAN RÖDER
Julian Röder (1981, DE) started as a photojournalist with Germany’s influential photography agency Ostkreuz. Throughout the years, Röder developed a unique conceptual-documentary approach. He currently creates series of photographs that negotiate structures of power, environment and economy far beyond that which is concretely shown in the images. His images offer insight into the societies we are part of and the governing powers at play.

ABOUT TOBIAS ZIELONY
Tobias Zielony (1973, DE) studied Documentary Photography at the University of Wales, Newport, before he continued with artistic photography at the Academy of Fine Arts Leipzig under Timm Rautert in 2001. Zielony is known for his photographic depiction of juvenile minorities in suburban areas. His critical approach to documentaries manifests in a specific aesthetic and relationship with fiction. People are often portrayed in a casual fashion that is sensitive to the visual language, gestures and poses a person uses.

Learn more about the Deutsche Börse Photography Foundation and its Art Collection here.