Let’s Sit Down Before We Go by Bertien van Manen (1942) consists of more than 60 photos, created between 1991 and 2009. During that time, Van Manen regularly and extensively travelled with a small 35mm camera through Russia, Moldavia, Kazakhstan, Uzbekistan, Ukraine, Tatarstan and Georgia.  She stayed for long periods with the people she met on her travels, learned their language and usually became friends with them.  This produced intimate and sometimes tender photos resulting from a personal and sincere relationship.

The title of the exhibition, Let’s Sit Down Before We Go, refers to an old Russian custom: before you leave on a journey, take a moment to think about where you come from, where you are going and why. This was also the case for Bertien van Manen. Since 2010 she has been traveling far less due to personal circumstances. with English photographer Stephen Gill, she sorted through more than 15,000 negatives.

Van Manen’s photos are intimate. The personal atmosphere of the photos is reinforced by the soft, nearly flat palette of colours. Take Pjotr and his family. They look relaxed standing there in the snow in their pyjamas and bare feet: posing for a photographer they have confidence in. You can see that in Pjotr’s smile as well as in the two men peering from the porch in an easy way. Or look at Vlada, sitting in her kitchen, surrounded by her possessions: the teapot she’s just poured from, the flowers she loves, her painting that she gazes at every day. The slight absurdity is not something Van Manen directs; it’s something she just happens to encounter. 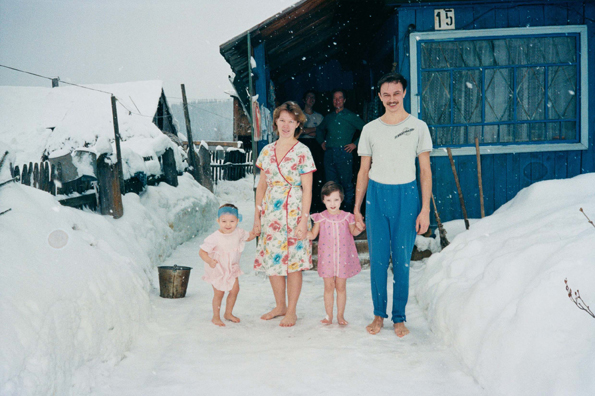 Pjotr and his family, Apanas, Siberia, from the series Let's sit down before we go © Bertien van Manen

ABOUT BERTIEN VAN MANEN
Bertien van Manen started out as a fashion photographer – and she still has an eye for detail and pattern – but inspired by Robert Frank’s book The Americans (1958), she decided on a more documentary approach. For a time she photographed in black-and-white, but she changed her style radically in the early 1990s. From that point on, she travelled with great regularity through Eastern Europe and Asia. Her many travels and intensive contact with the people she met resulted in the book A Hundred Summers, a Hundred Winters in 1994.

A logical follow-up was East Wind West Wind (2001), which was shot in China. In 2005 Van Manen published Give Me Your Image, comprised of photos of interiors in which the residents had placed a private photo of their own. Let’s Sit Down Before We Go (2010) is her most recent photo book. The character of this book is less documentary than her earlier books and therefore allows more room for the viewers’ imagination.