A special unit of the National People’s Army in the former DDR was tasked with the production of fake weaponry and the development of camouflage techniques. After the reunion of Germany this practice was continued and still exists today. The work of the unit called ‘Tarnen und Täuschen’ (Disguise and Deception) consists of creating impressions and experiences. Therefore their work can be considered an artistic intervention. 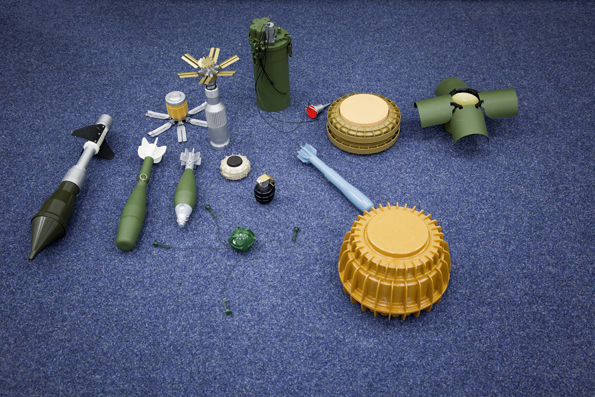 The underlying principle of ‘Tarnen und Täuschen’ and their artisanal fake weaponry are used as metaphors in the series Disguise and Deception. With her photographs, Anika Schwarzlose navigates a world consisting of deception and illusion. The series reflects on the nature of the image, on military and artistic strategies. The images refer to the Cold War and simultaneously represent a situation that is still current today.

In the exhibition different categories of photographs are combined: archival photographs from the ‘Tarnen und Täuschen’ unit, photographs taken by Schwarzlose at the workshop and photographs of tools constructed by the artist. She made these tools to alter the perception of reality right in front of our eyes. In combination with the other photographs the role of perception and the principle of make belief is used in both military and artistic practices is emphasized.

The exhibition is made possible by the Gieskes-Strijbis Fund and the Van Bijlevelt Foundation.

ABOUT ANIKA SCHWARZLOSE
Anika Schwarzlose was born in Berlin, the former DDR. She graduated from the Gerrit Rietveld Academie in 2009 and then pursued a MA at the KHM in Malmö. Schwarzlose works and lives in Amsterdam. In conjunction with the exhibition the book Disguise and Deception, A Mimetic Exchange of Strategies for Make Believe, published by Kodoji Press and Van Zoetendaal Publishers, will be launched.