Foam welcomes an exhibition by Alex Prager (Los Angeles, 1979), the winner of the Foam Paul Huf Award 2012. The prize is organised by Foam and awarded annually to a young, promising international photographer under 35. Part of the prize is an exhibition at Foam.

The exhibition features a selection of colour photographs from the series Compulsion, as well as the artist’s new short film, La Petite Mort, with accompanying film stills.

Inspired by the photography of Weegee and Enrique Metinides, and films such as Metropolis and Un Chien Andalou, Compulsion confirms Prager’s vivid cinematic aesthetic. Unlike previous series such as week-end (2010) and The Big Valley (2008), the protagonists remain anonymous and distant. Prager’s new series investigates the complexity of observation within a society inundated by compulsive spectators, as well as the recurrent discourse in photography — that ‘meaning’ is often derived from a multiplicity of gazes.

In her new short film, La Petite Mort, starring French actress Judith Godrèche, Prager navigates the mystery of death through the eyes of a woman experiencing the boundaries of her body and those of this world. The film features music by composer Ali Helnwein and Director of Photography Matthew Libatique (Black Swan, Iron Man, Requiem for a Dream). 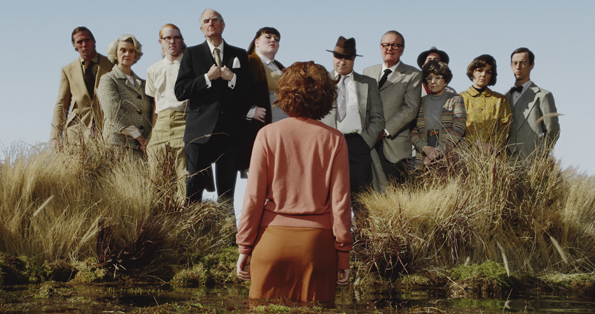 This exhibition has been made possible with help of the Michael Hoppen Gallery.

ABOUT ALEX PRAGER
Born in 1979, Alex Prager is a self-taught American photographer and filmmaker who lives and works in Los Angeles. Featured in MoMA’s New Photography 2010, Prager’s work has been exhibited at institutions worldwide. Prager's work has been featured in publications such as Foam Magazine, the New York Times Magazine, American Vogue, W Magazine, and Art in America. Additionally, her photographs are in the permanent collection of several major museums, including the Museum of Modern Art, New York, the Whitney Museum of American Art, the San Francisco Museum of Modern Art, Kunsthaus Zurich, and Moderna Museet, Stockholm, among others.