Foam curator Hinde Haest talks to Mårten Lange (b. 1984, Gothenburg, Sweden) about his latest book Chicxulub. A conversation about dinosaurs, discoveries and science-fiction.

HH: You recently self-published Chicxulub (2016), a book with quite an unintelligible title. Could you explain what it is about?

ML: It is the name of a Mexican village, located at the place where the asteroid that killed the dinosaurs hit the earth. When you see this strange word you will want to know what it is and google it. With the title I avoid the interference of text, because hopefully people will look it up online and know what the book is about.

You demand an actively engaged viewer.

I demand curiosity. Or at the very least I hope to inspire curiosity.

Your photographs are detailed studies of seemingly arbitrary subjects such as ants, leaves and rocks. What is it about Chicxulub you were you looking to document?

The asteroid hit many millions of years ago so there is no visible trace of the event. There is nothing to see. The challenge is how to use photography, a medium that shows the surface of something, to talk about something that is invisible and in the past. To do this I built a story with elements that reminded me of prehistoric times. I also pictured dead animals as a reference to the violent destruction caused by the asteroid. The book deals with life as a destructive force.
In a way Chicxulub experienced a double apocalypse: long after the dinosaurs went extinct the Mayans founded their civilization, which was in turn destroyed by the Spanish. Now, the region around Chicxulub is one of the most touristic parts of Mexico. In a way, the book is about the coming and going of different worlds in one place.

“When you photograph something
it becomes exaggerated,
even grotesque.”

How did you identify Chicxulub as your subject? Did you visit Mexico with a preconceived plan?

Dinosaurs are a childhood fascination, like that of so many. When I lived in New York City during a residency at ISCP, I figured now was the opportunity to go and see this place. What started as a trip to satisfy my curiosity resulted in a lot of raw material that I edited into the book. I quite often work like that. I take a lot of images and then try to make sense of them. Reality is constantly surprising.

You often work with found objects and situations you encounter in passing. You photograph en face, which makes ordinary subjects look estranged from their environments. Like sculptures.

I like to look at things one thing at a time. By photographing something it becomes something else. You might not even stop to look at the ants, but in a picture they become a mystery, even though a photograph is very much a realistic and  surface-based medium. I like this duality of how photography is meant to show people what stuff looks like, but also completely obscures it because nothing ever really looks like it does in the picture. When you photograph something it becomes exaggerated, even grotesque.

“My collections are
never complete.”

Your method has been compared to that of a collector or a forensic scientist looking for evidence. In Chicxulub you seem to adopt the perspective of the researcher, who classifies information, and the archaeologist, who uncovers hidden worlds. Do you identify with this analogy?

A collection suggests there is a missing piece that completes it, whereas my collections are never complete. There are infinite possibilities, an infinite number of ants or lizards to photograph. I guess I would identify most with the archaeologist, who goes around looking for traces and asks himself: what could this mean, is it of importance? The difference between archaeology and my photography is that I decide what is important or not. I choose a subject, whereby it becomes important. The scientist comes up with a theory and then goes out and tests it. I have a theory and then make it happen.

You pay equal attention to monumental Mayan temples and more modest subjects like ants on a rock. They are juxtaposed on the same page and at the same scale. Are you making a statement?

It is a simple way of showing that everything is important. Wolfgang Tillmans said “If one thing matters, everything matters.” I like this kind of hyper-democracy.

You once said “You’ve got this lens, which sees everything, but it understands nothing.” Is this what you try to achieve through your work: to make sense of the world?

Photography has always been a way for me to order the strange and the random. The world we live in is not ordered like a book, with a beginning and end. Sequencing is a way for me to make sense of things. When the scientist comes home from his field trip he will have labelled his samples, named them, sorted them by size: that’s language. Photography is another language we apply in order to organise and understand the world.

“When a system is very
complex, it looks chaotic
to the untrained eye.”

Woodlands and Machina were made as a diptych. The machines look like a jungle, and the trees look like a wire system. When a system is very complex, like a forest or the lab I photographed, it looks chaotic to the untrained eye. This to me is a fascinating contradiction: when something makes so much sense that you can no longer see the logic because it is too complex to grasp.

During your recent residency at ISCP in New York I noticed you increasingly started photographing people. What is your next project about?

I am currently working on a project about city life, technology and surveillance: all very much human concerns. Before this project there has only ever been one person in my work. Still, the people are photographed from a distance and surrounded by urban structures. I don’t really engage with my subject. I am working from afar, like a surveillance camera.

Once again, you are accumulating evidence.

Maybe this project is not so much about evidence or the scientific, but more about science fiction. Images I took while living in Tokyo, London and New York will all converge into one dystopic mega-city. It is not about the place, but about a time. About the way people live today in urban environments. It is a fictional story about the future, created by looking at contemporary life.

Mårten Lange was born in 1984 in Gothenburg, Sweden. He obtained his BFA Photography from the University of Gothenburg in Sweden in 2009, and his MFA Photography from the University for the Creative Arts, Farnham, United Kingdom in 2011. His work has been recently exhibited at AIPAD (2016), Pedro Alfacinha (2015), Art Fair Tokyo (2015), Paris Photo (2013 and 2014), MELK (2013) and Unseen (2013). Mårten Lange is the recipient of the 2016 Lewenhaupt Grant. He is represented by Robert Morat Galeri.

Another Language and Chicxulub are on view at Landskrona Museum in Sweden, from 19 August – 16 October 2016.

Citizen is currently exhibited at Galleri Charlotte Lund in Stockholm, from 1 September – 8 October 2016.

The book Chicxulub is available here. 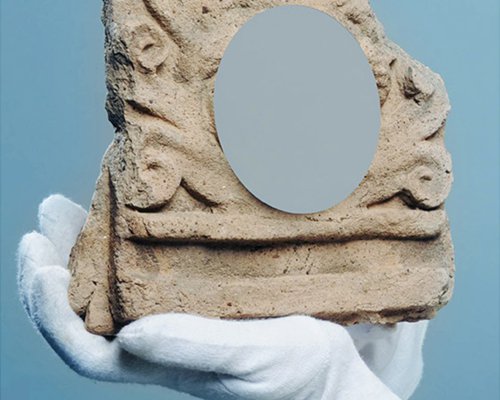 Justyna Wierzchowiecka: Taking back the museum

Tom Callemin: It's all theatre