In conversation with Daniel Shea

Daniel Shea was awarded the twelfth Foam Paul Huf Award for work in which he presents a seductive and disconcerting world of concrete, steel and glass that traverses the boundaries of fact and fiction. Shortly after winning the award, Hinde Haest, the curator of the upcoming exhibition of Shea's work at Foam, interviewed the artist.

Hinde Haest: Let me first say congratulations on winning the Foam Paul Huf Award 2018! We were delighted to learn that you were selected from 100 nominated photographers. Besides receiving a considerable sum, this also means your work will be presented in a solo exhibition here at Foam. How do you think winning the award will effect your practice?

Daniel Shea (photographer): Thank you, it is an incredible honor, truly. The timing has been very surreal, as I just finished a book project that I’ve been working on for several years, and opened an exhibition in London. I’m very grateful for the exposure that’s come with the Paul Huf announcement. This will effect my practice by giving me the resources and exhibition space to continue showing the work that I’ve been developing for the book, to move from the page to the wall.

HH: "Your photographic interest lies with urban architecture and construction, most notably in your own neighbourhood, Long Island City. The jury statement reads: ‘His latest body of work 43-35 10th Street, allows us to reflect on late capitalism and its effects on a changing city landscape.’ What is it that you are addressing with this project?"

DS: "The title refers to my home and studio address. I live on an island in a sea of residential condo development. Though the title points towards a specific place in Long Island City, its subtext is the way in which the urban environment is being re-shaped and gentrified in cities globally. The typical narrative about how cities and neighborhoods get gentrified is that more adventurous and creative people move in search of cheap rent. This then is a signal for real-estate developers to move in, and re-shape the neighborhood economically. The work is constantly shifting between these micro and macro perspectives of this specific address and how it might relate to a more global phenomenon." 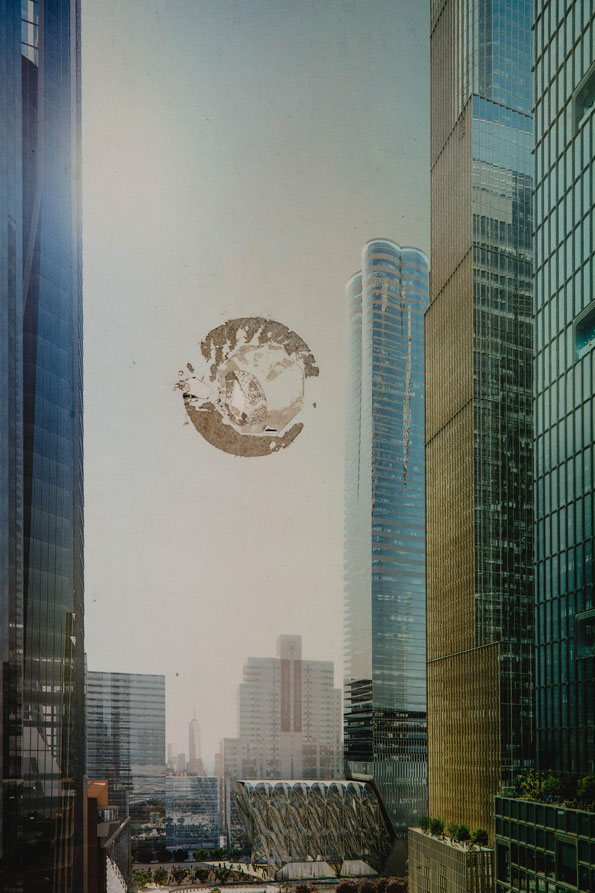 HH: "The people who inhabit the buildings and constructions that you photograph are barely present in the work."

DS: "Yes, this is important to me for a couple of reasons. I’m not very interested in making portraits because the personal way in which we relate to the human face complicates the structural approach I am taking towards visualizing broader societal issues. The story of an individual person can be very moving but often fails to communicate underlying systemic complexities. Architecture, to me, exists somewhere between the human scale and the wider geographical and temporal scale. Buildings out-live us and have a mnemonic presence. They reflect human psychology. When people appear in the images, they are often archetypical; construction workers, building buildings that they can not afford to live in, or white-collar workers moving in and out of a building’s plaza, like the ones you would see in advertisements for condo buildings. They take on a kind of anonymous personhood."

HH: "They almost become demographic types like the workers portrayed by August Sander in the 1920s. Your work is also reminiscent of the industrial typologies Bernd and Hilla Becher photographed in the 1960s and 1970s. Is this an association you can relate to?"

DS: "An early interest for me was the Bechers’ work and the Düsseldorf School of Photography. Many photographers tend to fetishize this idea of picturing the world as an unexpected kaleidoscope of beautiful, diverse things, people, and places. The Bechers did almost the opposite. They very simply looked for patterns in the world and showed a type of experience that transcends specific landscapes and locations. It was an almost perverse gesture at the time, but a pretty profound one because it spoke to something deeply structural about a world that appeals to me and continues to influence me today."

HH: "You use architectural structures as compositional elements in a highly aesthetic and formalistic sense. Yet your work also documents socio-economic change. It reminds me of Berenice Abbot’s photographic documentation of a rapidly changing New York in the 1930s. Whereas Abbot’s work is distinctively documentary, you layer many different images from various times and places. Where do you position your work on the spectrum between the social documentary and the fictional?"

DS: "I don’t believe that a lucid, pure documentary image exists. But I’m very interested in finding new forms within what feels like straight picture making. A project usually starts with simply wanting to go to a place and figure it out. Then slowly, as the work develops, I start to have very strict ideas about the missing pictures and I find a way to make them. There have been moments when I wrote down exactly the type of picture that was in my head and how to realize it. I don’t feel precious about authorhood; I’m eager to include images by other photographers in my books and have commissioned people to make images or graphics that exist within the scope of the project."

HH: "You use many different techniques to create multi-layered images. Some prints look deliberately damaged, and sometimes the image continues onto the mount and frame. You even grind parts of the image into the glass of the frame. (Why) is this physical, almost sculptural way of dealing with photography important?"

DS: "Today, everybody relates to photographs digitally, but almost all images never get printed. When you do decide to print something and put it on a wall, the work really needs to defend its position on the wall. There has to be a reason why you materialize it in the first place. The layering of images, the frame glazing, the glass: these elements all need to be synthesized and complement the image conceptually."