What is fashionable and what does it convey about ourselves? How do we adorn ourselves? How do we use fashion to show who we are, who we think we are, or who we want to be? The exhibition Adorned – The Fashionable Show presents intriguing and challenging fashion related photography projects created by a new generation of visual artists. They all work with fashion, but most of them are not straightforward fashion photographers. For them, fashion and style are primarily tools to construct or question identities, to empower people and to play with cultures, gender, race and ages. While some participating artists have already been discovered by well-established fashion brands, others continue to work from within their own communities. They are outspoken, challenging, critical or provocative, but always highly relevant in a time defined by fundamental power shifts in which access, diversity and identity are key words.

What we used to call fashion photography now seems to belong more and more to a spectrum of different languages. Photographers make use of fashion aesthetics to focus not so much on creating a glamorous ideal of perfect bodies with the most beautiful and precious clothes, but instead on telling stories of social and political inclusivity, diversity, identity, everyday life and an ever-changing panorama of lifestyles. This can be seen through the casting of the models, the commissioned photographers, and the geographical locations chosen for photoshoots. They challenge and question the notions and the standards of what beauty, glamour, style and ideal is. They often refuse to be labelled as fashion photographers altogether, instead creating hybrid identities for themselves in which concepts of documentary, performative arts or the chronicle are presented within a fashion(able) context. All of this is achieved by blurring and blending in categories, with the connection to the arts being more and more central to the discourse. 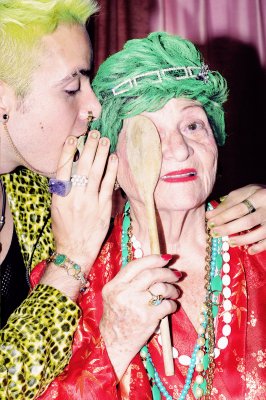 THEMES
The works in the exhibition act as a measurement of our progress towards new ways of seeing and being. Artist Catherine Servel’s series of refreshingly average sized models makes a compelling case for using models who are more representative of the wider population, while Sneakers like Jay-Z, a project by artists Ambroise Tézenas and Frédéric Delangle, presents an intimate look at how identity can re-shape itself in response to a change in environment and circumstance using clothing as a signifier and catalyst. Alongside this, there is also an emphasis on young photographers representing the LGBTQ+, black and POC communities. One example being Mohamad Abdouni who explores and documents his community and queer culture in the Middle East. Justin Dingwell’s body of work A Seat at the Table refers to the phrase of widening conversation and debate and working to ensure that a broader spectrum of voices are heard and have the opportunity to sit at the negotiating table, where decisions are made, rather than it continuing to be a position for the privileged and the few. The table being the fashion industry determining the rules of beauty.

FASHION MAGAZINE INTERVENTION
The exhibition is inspired by Foam Magazine issue #53 Adorned – The Fashionable Issue. For the magazine Foam invited three of the most forward-thinking fashion magazines, Buffalo Zine, Beauty Papers (installation by Casper Sejersen and Gary Gill) and King Kong, to contribute with a curated intervention. Their vision on fashion photography will be showcased in the exhibition.

Adorned – The Fashionable Show is made possible by Fonds 21 and Kleurgamma Fine-Art Photolab.

NOTE TO EDITORS
For information and visual material please contact the Press Office of Foam on +31 (0)20 5516500 / pressoffice@foam.org.