Below an overview of Foam's most recent press releases. Images are available exclusively for press with permission from Foam.

For the first Foam 3h of 2020, the floor has been given to the artist Sheng-Wen Lo (Taiwan, 1987). He will present his most recent project Extendable Ears (2019), in which he exposed himself to ultrasound waves for a month. Ultrasound waves exceed the audible human capacity, but can be heard by animals such as cats and dogs. Lo encourages audiences to discuss the relationship between humans and animals, by using 360o photographs, videos and photographic scans of dream diaries he kept during his experience.

Foam will open 2020 with the first-ever exhibition in the Netherlands of the celebrated American author Wright Morris (1910-1998). As well as being a writer, Morris devoted a short period of his life to photography. In his own distinctive way, he portrayed the poverty and decline that plagued the United States in the 1930s and 40s. He incorporated his photographs in so-called ‘photo-text’ books in which images and writings reinforced each other. Although relatively unknown, and overshadowed by his prize-winning literature, his photographs are on a par with other iconic photographers of the time.

Foam presents the first solo museum exhibition of the French artist Solène Gün (1996). Her project Turunç is a series portraying the everyday life of young men of Turkish descent in the suburbs of Paris and Berlin. Herself of mixed French, Turkish and Kurdish ancestry, Gün seeks to capture their social environment. Her photographs document the hope, fraternity and solidarity that unites them as a community, despite the boredom, the violence and the despair they are confronted with.

Untitled, from the series Fixing shadows; Julius and I, 2018 © Eric Gyamfi

Eric Gyamfi (1990, Ghana) is the winner of the 13th Foam Paul Huf Award, which is awarded annually by an international jury to talented photographers under the age of 35. Gyamfi uses a wide array of visual techniques to create visual narratives that hover somewhere in between autobiography and fiction. His work comprises collages, texts, audio and photographs developed according to various methods, including cyanotype and silk screen printing. His portraits and diaristic installations are highly personal, yet transcend the artist’s individual experience. 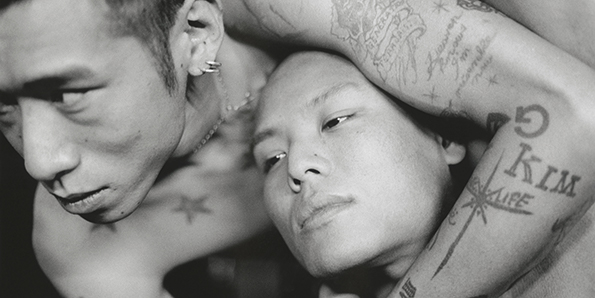 Untitled, from the series Boys of Hong Kong, 2018 © Alexandra Leese/ courtesy of the artist

The exhibition Adorned – The Fashionable Show presents intriguing and challenging fashion related photography projects created by a new generation of visual artists. They all work with fashion, but most of them are not straightforward fashion photographers. For them, fashion and style are primarily tools to construct or question identities, to empower people and to play with cultures, gender, race and ages.

Foam is proud to announce the names of the 20 young artists whose work will feature in the upcoming Foam Magazine #55: Talent, which will be published in December 2019. Successively, in 2020 the Foam Talent Programme with talks, events and a large-scale presentation will travel internationally to New York, London and Berlin.